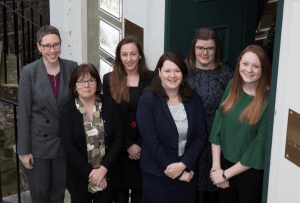 Edinburgh law firm Gibson Kerr has recruited three solicitors among a raft of appointments as it builds on its acquisition in 2016 of two Edinburgh legal firms, Marwicks and Grange, solicitors & estate agents.

The firm, which operates from two city centre locations, is led by its three partners Scott and Fiona Rasmusen, and Lindsay Maclean.

Mr Rasmusen said: “The mergers with Marwicks and Grange Solicitors & Estate Agents, and supported by a digital marketing drive, has seen a significant surge in new business.”

The new solicitors are Caroline MacBeath and Sue Anne MacAulay, who have joined the family law team, and Katie Marshall who will work in the personal law department.