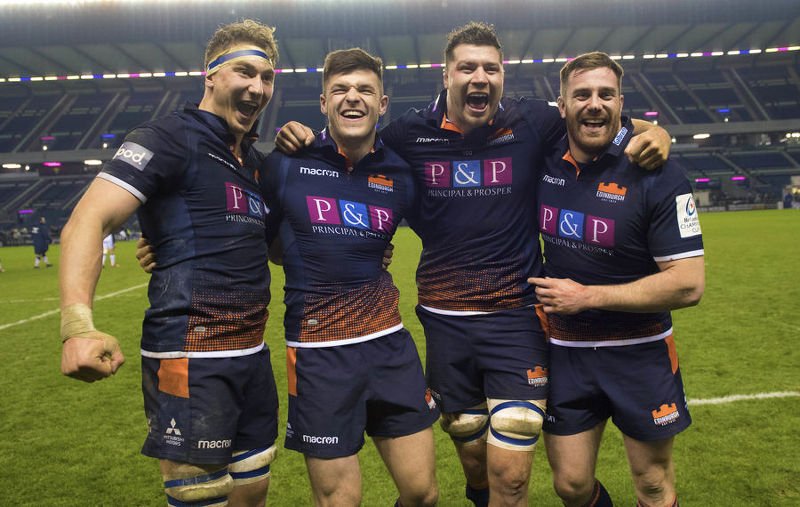 It was an historic night for Scottish rugby with Edinburgh’s victory ensuring both Richard Cockerill’s side and Glasgow qualified for the quarter-final of Europe’s elite tournament.

The deserved win over Vern Cotter’s visitors was the hosts’ fifth successive victory in the competition and ensured a home draw in the last eight.

Glasgow were also celebrating after seeing their ticket to the quarter-final stamped with a game in hand, the Warriors in action tomorrow evening at Saracens in a Pool 3 decider.

It is the first time the two teams have made it this far against the cream of Europe in the same season.

Nearly 12,000 fans descended on Murrayfield to see if Edinburgh could continue their impressive run and the home fans weren’t disappointed.

Ahead 9-7 at the interval, the home side rallied after the French sent over a penalty early in the second period and the decisive score came in the 61st minute when Darcy Graham touched down.

The conversion from Jaco van der Walt put two scores between the sides and with Edinburgh’s defence resolute, the nine-point gap was always going to be too much for Montpellier.

“We are a big team now. We are in the quarter-finals of the European Cup,” said Cockerill.

“Why can’t we bring Munster, or Exeter, or whoever it is here and beat them? There is no reason why not. It is in our own heads. We are going to do everything we can to win.”

Captain Stuart McInally was one of his team’s star performers and he spoke of the players’ pride at their achievement of topping Pool 5.

“The way we set about the scrum stood us in good stead and we are massively proud of that,” he said.

“We are really excited to get back here for the quarter-final.

“We knew the quality of player Montpellier had. They had a period in our 22 where we held them out and that probably won us the game.

“We have just worked as hard as we can and it is nice to see the rewards are coming.”

The quarter-finals will be staged on the weekend of 30-31 March.