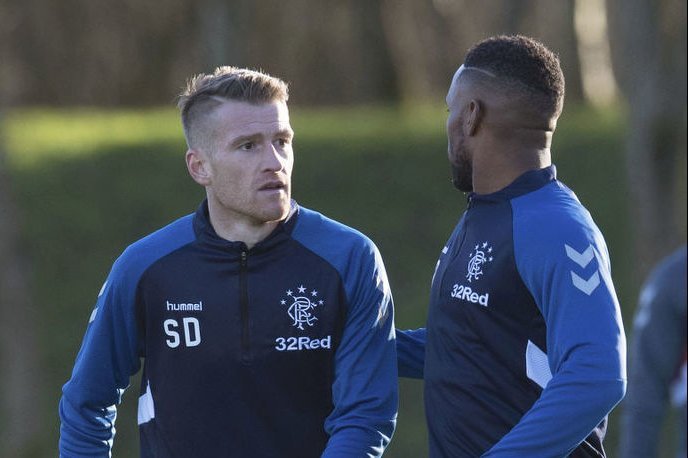 New signings Jermain Defoe and Steven Davis will have to wait for their Rangers debut after Cowdenbeath cup-tie postponed (pic: SNS Group)

The cold snap has claimed its first football fixture of the weekend with the Scottish Cup tie between Cowdenbeath and Rangers called off due to a frozen pitch.

Despite the League Two side having put protective covers down with the help of volunteers earlier in the week in a bid to protect the grass, the Central Park surface failed an inspection three hours before kick-off.

New signings Jermain Defoe and Steven Davis were set to make their Rangers debuts in front of a sell-out crowd of 4,300.

Ironically, it was due to be the first game played by Steven Gerrard’s side after they returned to action following the winter break.

The fourth-round meeting was also scheduled to be shown live by Premier Sports, the first match in its recently-agreed Scottish Cup deal.

The new date for the cup-tie is Wednesday, 30 January.

The hosts were unhappy at the call from a local referee.

“We were confident that the pitch was good,” Cowdenbeath director Tom Ewing said.

The referee’s made his decision and we’ve got to abide by that, but we are hugely disappointed. We didn’t call the referee in. We felt the pitch was fine.

“Some of the Rangers staff arrived and the next thing there were discussions with the SFA and they wanted to send the referee along.

“It’s their game and we’ve got to abide by that. It was a local referee that was called out and in our view it was only a precaution.

“We played in the Betfred Cup a couple of games here after a long, dry summer and I would absolutely say the pitch was harder then that it is now.”

Defoe, 36, has signed an 18-month loan deal from Bournemouth with Davis returning to Ibrox on a similar agreement from Southampton.

The overnight freeze also forced this afternoon’s race meeting at Musselburgh to be abandoned, with the next action at the East Lothian track scheduled for Saturday, 2 February.