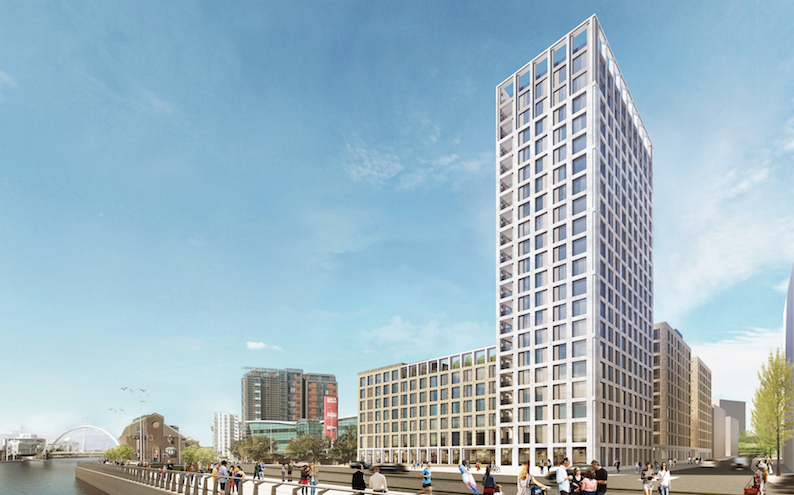 Detailed planning permission has been granted for a 498-apartment build-to-rent development on the banks of the River Clyde.

The £100m scheme, which sits on the Broomielaw, one of Glasgow’s major thoroughfares, is being delivered by PLATFORM_, a developer and operator of private rented housing.

Once completed, the Finnieston development will offer a mix of studio, one, two and three-bedroom apartments for rent, spread across four blocks ranging from six to 20-storeys in height. Rents will be priced to be affordable to more than 50% of workers locally.

The homes will be among the first purpose-built for renting in Scotland, and sit alongside co-working spaces, a shared residents’ lounge, on-site concierge, roof terraces, fully kitted-out gym and games room.

Construction is due to begin in the third quarter of this year, with completion in 2021.

Designed by Glasgow-based architects Keppie, the development forms part of a wider masterplan at the Clydeside Central Quay area, which includes 300,000 sq ft of office space and a 150-room hotel as well as new housing.

The build-to-rent sector is expanding rapidly, with nearly 140,000 build-to-rent homes either completed, under construction, or in planning.

Glasgow is now in the top five cities outside London for the number of homes in planning, under construction and complete.

Research published by the British Property Federation (BPF) shows that the total number of Build-To-Rent homes (BTR) – new high quality and professionally-managed homes built for renters – under construction across the UK has increased by nearly 40%, with developments outside London being given the greenlight at a faster pace.

In Scotland, a drive to boost city-living is behind the development of large-scale build to rent projects, particularly in Glasgow, Aberdeen and Dundee.  This is supported by the continued exemption of large-scale Private Rented Sector (PRS) investments from the Additional Dwelling Supplement tax.

According to figures produced by Savills, Scotland has 3,745 BTR homes actively being developed, an increase of 11% in six months, with Glasgow accounting for 2,180. Many thousands more homes are known to be in the planning pipeline with investor appetite strong, but translating this into real homes and communities remains a challenge.

For the first time, the total number of completed build-to-rent homes across the UK regions has caught up with the total in London with 14,615 completed homes in the regions and 14,801 in the capital. As build-to-rent continues to grow, it has also been able to diversify its offer, with 15% of schemes in the pipeline including houses, rather than just typical high-rise apartments.

David Melhuish, director of the Scottish Property Federation said: “There is significant potential and investor appetite for BTR to add much needed supply to our housing stock and to boost the cities’ desire to encourage city-living.

“Glasgow is clearly at the forefront of this building boom but there are also significant proposals in both Aberdeen and Dundee as well.

BAM Construction has reached financial close on two healthcare projects which are being delivered for NHS Greater Glasgow and Clyde by hub West Scotland. 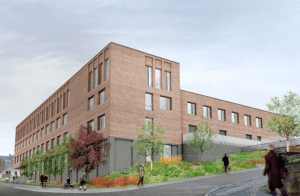 Housed in a new three storey building designed by Scottish architects, Hoskins, the facility will bring together four existing GP practices, district nurses, health visitors, dental and podiatry departments and a number of out-patient clinics. The design even includes a new community café.

Work will start later this month and is scheduled for completion in August 2020.

The second project, by Keppie Design, forms part of Stobhill’s dedicated Mental Health Campus on Balornock Road in Glasgow. BAM is set to create an £8.5m single storey building which will provide residential care for acute admissions and complex clinical care patients.   Work on this will run in parallel with the Greenock project.