'Not enough time for key bills'

Theresa May: heading for defeat

Westminster sources are saying that it looks increasingly likely that Brexit will be delayed beyond the 29 March deadline.

The Evening Standard in London, whose editor is former Chancellor George Osborne, says it has been told by Cabinet ministers today that a backlog of at least six essential Bills that must be passed before Britain leaves the European Union. This has left ministers convinced the timetable will be extended.

The report led to the FTSE 100 falling as sterling rallied against the dollar and euro, dragging the exporter-heavy index off earlier highs.

Ministers believe that even if MPs sit at weekends and cancel their half-term holiday in February there may not be enough time to avoid asking for a delay.

One minister told the newspaper: “The legislative timetable is now very very tight indeed. Certainly, if there was a defeat on Tuesday and it took some time before it got resolved, it’s hard to see how we can get all the legislation through by March 29.” 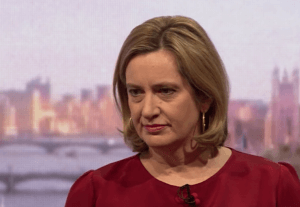 MPs are due to vote on Prime Minister Theresa May’s withdrawal agreement on Tuesday. Work and Pensions Secretary Amber Rudd, pictured, refused three times during a radio interview to deny she would resign if Mrs May attempted a disorderly departure from the EU without securing a withdrawal deal.

Tory rebel Dominic Grieve said the PM should strike 29 March as Brexit day from UK law if her deal is voted down.

A group of Cabinet ministers is said to be pushing a Plan B in order to win Labour support. Chancellor Philip Hammond, Cabinet Office minister David Lidington, Business Secretary Greg Clark, Justice Secretary David Gauke, and Ms Rudd, are believed to want permanent membership of a customs union, which Labour has proposed.

The BBC estimates that Mrs May is heading for a massive defeat by a margin of 228 votes next week.

Despite her insistence that Britain will leave on 29 March British officials are said to be consulting with other EU countries about an extension of the Article 50 process that set a two-year deadline for Britain to leave the bloc.