Tourism needs to provide a dividend for citizens

The residents are revolting, goes the old saying. Put another way, many of Edinburgh’s citizens are bombarding the local paper and social media with complaints about the city being turned into a theme park.

It’s now getting more attention from those whose job is to manage this apparent imbalance between their needs and those of the city’s growing visitor numbers.

Marketing Edinburgh chairman Gordon Robertson used the organisation’s Christmas reception to deliver a punchy speech in which he acknowledged these concerns, including  those who see AirBnB letting out neighbouring flats to noisy visitors, or commuters stuck in traffic generated by the rising numbers wanting to share the city’s delights.

He raised an important issue at a time when the council is considering a tourist tax which would allow the city to draw some benefit from its popularity. Edinburgh is not alone in this in, Highlands is heading down the same path, but the capital is more noticeably seeing a need to ensure the hordes of visitors do not suffocate those living and working in the city.

Robertson referred to the ‘Disneyfication’ of Edinburgh, and how such a term might be viewed with a negative connotation, turning its history and heritage into a fluffy, fictionalised and frivolous version of itself. In fact, he offered a defence of the Disney effect, noting how well Disney operates, a view shared by the millions who visit its attractions each year.

“Having been in Disney this year with my family, I’m not so sure Disneyfication is a bad thing,” said Robertson, “At least they’ve invested in their sites, they have a plan, it provides thousands of jobs, their well-trained staff provide a fantastic experience and they’re extremely profitable which is used to invest back into the product.”

With tongue in cheek, he added: “It’ll never catch on here.”

He may have a point, although Edinburgh and Scotland is not a fantasy world and there is a need to ensure the management of the city is geared towards balancing its heritage and its role as a modern commercial centre. 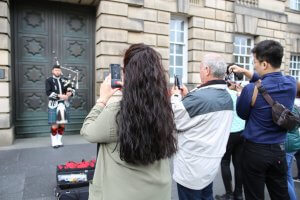 Robertson knows this is the way forward – “None of us want to live in a theme park, but I think that with a better conversation and smarter thinking we can decide on the right balance,” he said.

But as he told me after his speech: “Tourism has got to a point where we are beginning to impact on people in the city. We have to get a better balance between tourism and residents and that means we need to make the narrative better.”

Robertson says residents want to see tourism “paying its way”. The tourist tax could be a key starting point, though I detect some unease about use of the word “tax” with its inference of something punitive. If the narrative is to be improved then citizens need to benefit from a tourism “dividend”, the payback that would result from imposing such a tax.

If it should be approved – and there is a fierce campaign against it – there needs to be visible evidence of how the money raised is being used for the benefit of those living and working in the city, not simply feeding the tourism industry itself.

While hotels and restaurants object to bearing the brunt of a tourist tax, a survey by Edinburgh Chamber of Commerce showed 70% of businesses supported the so-called transient visitor levy. They clearly see how it could feed beneficially into the local economy.

How better than combining these funds with more help for struggling retailers, particularly in the off-peak tourist season? Discounted car parking or vouchers for residents to spend in the shops?