Title race heats up as Rangers climb to Premiership summit 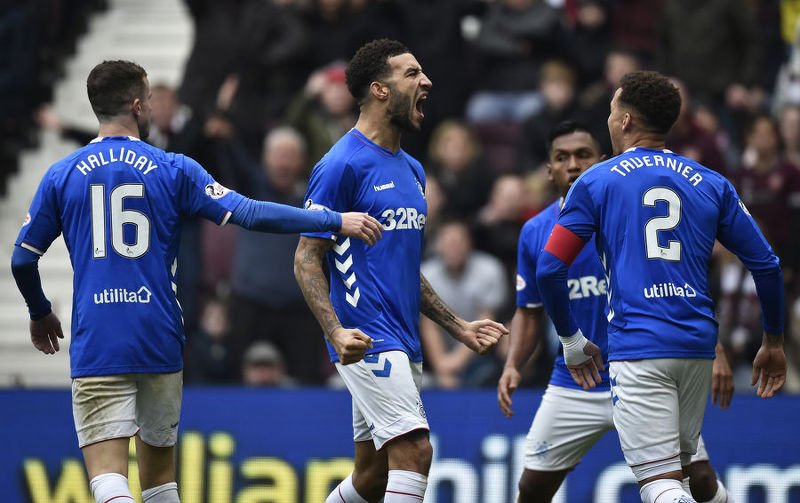 Connor Goldson celebrates his equaliser against Hearts as Rangers came from behind to win at Tynecastle (pic: SNS Group)

There might just be a meaningful title race this season after 10-man Rangers demonstrated their resilience to climb to the top of the Scottish Premiership.

Goals from Connor Goldson and Alfredo Morelos cancelled out an earlier own goal from Gareth McAuley as the Light Blues leapfrogged Celtic to take over at the summit, albeit having played a game more than their arch rivals.

Steven Gerrard’s side had to do it the hard way in Gorgie after Scott Arfield was red carded in the second half for a late challenge on Hearts keeper Bobby Zlamal.

However, not for the first time this season under their manager, the Gers made light of their handicap to see the match out.

With Celtic in League Cup Final action against Aberdeen, Rangers made the most of their opportunity and the comeback victory was a real statement of intent from the Ibrox outfit who are sitting at the top of the table at this stage of the season for the first time since 2011.

Gerrard hailed his players for their performance, coming just three days after 10 men battled to a 0-0 draw at home to Villareal in the Europa League

“You’ve got to be resilient in this league, especially against teams like Hearts, who don’t go away,” he said.

“When the game is 2-1, you know the game is still in the balance, but the lads have shown unbelievable mental strength and character.

“We emptied it on Thursday night and had 72 hours to recover.

“Hearts before the game were talking about energy and intensity but we were the fitter and better today.

“They were better for the first 20 minutes, but we completely dominated the game thereafter.”

The Jambos were gifted the start they had been craving via the boot of McAuley as he tried to clear a cutback, though they soon found themselves trailing as Rangers turned the game on its head in a six-minute period.

Goldson bundled the ball over the line from close range in the 35th minute, and moments later they were celebrating again.

There was good fortune surrounding the visitors’ winner, however, with the officials failing to spot Morelos in an offside position before he glanced home a free-kick from James Tavernier, the in-form Colombian’s 17th goal of the season.

Arfield was dismissed for sliding in on Zlamal with the keeper lying on the ground with the ball in his hands after saving a shot on the line.

Despite having an extra man for the last 20 minutes, though, Hearts created little in front of Allan McGregor to push home their numerical advantage.

Craig Levein hit out at referee Bobby Madden after his side’s sixth game without a win, claiming he felt Hearts were “playing against 12 men”.

The Gorgie boss said: “I’ve lost my voice shouting at the referee. I thought it was a terrible performance.

“Like Neil Lennon said when Hibs played Celtic at Celtic Park, it was like playing against 12 men.

“How many fouls can you give away without being booked?

“I was delighted with the players after their difficult run and I feel that, on another day, it is a game we could have won.”