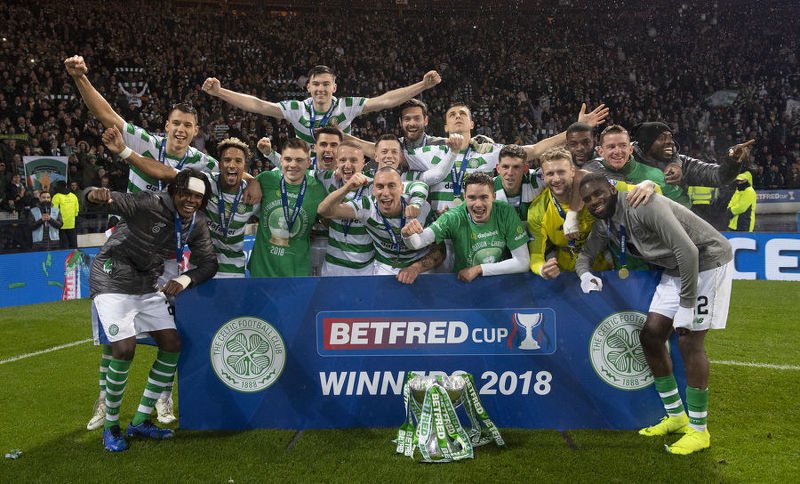 Celtic’s vice-like grip on domestic silverware shows no sign of loosening after they made it seven trophies in a row under manager Brendan Rodgers.

Having won back-to-back trebles under the Northern Irishman, the Hoops secured the first honour of the current campaign with a hard-fought victory over the Dons.

The Pittodrie side went toe-to-toe with Celtic but it was their former loan star Ryan Christie who proved the difference on the day as the holders captured their 105th major honour.

Christie netted the only goal of the game in stoppage time in the first half, the action having been halted for six minutes after a sickening clash of heads between Gary Mackay-Steven and Dedryck Boyata in the Celtic penalty box.

While the Belgian was able to continue after treatment, there was real concern for the Aberdeen player, who lay motionless on the pith for some time. He was eventually stretchered off and taken to hospital, with both sets of players clearly shaken by the incident.

Celtic could afford to miss a 52nd-minute penalty, Joe Lewis saving superbly from Scott Sinclair after referee Andrew Dallas had harshly given handball against Dominic Ball.

Derek McInnes couldn’t ask for any more from his men, his players managing to stifle a lot of the flare shown by their opponents in recent matches.

To underline Rodgers’ impact at Parkhead, the win was Celtic’s 22nd successive cup triumph since he replaced Ronny Deila in 2016.

“It was a very tough game for us. I’m very satisfied. A moment of real quality won us the game,” he said.

“It was a brilliant finish by Ryan.”

Rodgers sent Christie out on loan to Aberdeen for 18 months before his return to Glasgow in the summer and the move has proved a shrewd one.

“I felt when I came in he wasn’t ready to make an impact,” said the Celtic manager. “He’s been absolutely brilliant for us since getting into the team. He has shown he has the personality to play at a big club.

“Aberdeen played a big part in his development.

“He’s come back and shown he’s ready to be a Celtic performer and, the last two months, he’s been amazing. He deserves the man of the match.

“When I first came up here, he used to be Charlie Christie’s son and now Charlie is known as Ryan Christie’s dad.”

Aberdeen’s lack of cutting edge in the final third meant they were unable to put Scott Bain under enough pressure in the Celts’ goal and ultimately paid the price.

“I thought we dealt with everything apart from the counter attack,” said McInnes. “Obviously we are 1-0 down and we managed to scramble a lot of their breaks but I thought it was really controlled work against the ball in the first half.

“Whether the disruption knocks our concentration – it was too big a gap for Christie to run into but other than that I thought we kept their opportunities to a minimum.”