The Scottish Finance Secretary, Derek Mackay, has run out of rabbits. His Budget for 2019/20 lived up to expectations. It was flat, uninspiring and offer little genuine hope for Scotland’s economic future beyond his own spin.

It was just as well most people were looking south to watch political developments in Westminster, as Theresa May sought to defend her premiership. If ever there was a day to bury bad news then Wednesday was the day to do it.

Mackay can count himself lucky there was not more focus given over to his brave attempt to talk Scotland’s public finances up, but over the coming year I have no doubts the detail will be unpicked as forecasts are missed and the Budget will unravel.

The first issue that needs put to bed is – will it be passed? I fully expect it will, but only after an “Oh no we won’t” – “Oh yes you will” pantomime by the Greens complaining about the lack of an SNP commitment to introducing a new local tax to replace or add to Council Tax and being coaxed with vague promises and possibly some (biodiverse) pork barrel spending commitments (more money for local government).

It should be remembered that it is the Budget process that makes the Greens relevant, so although the SNP’s minority position gives them some leverage they cannot overplay their hand, and they will succumb when it really matters.

The headline issues are interesting. Take Scotland’s economic growth for instance, great fuss was made of Scotland’s GDP growing faster than the rest of the UK’s. Naturally, being a political speech the reality was to be found in what was not said. So, yes, Scottish growth next year is expected to be marginally greater than the UK’s as a whole at 1.4% compared to the UK’s 1.3%.

The Scottish Fiscal Commission has added some irony by stating that the higher expectation of growth this year is based on the increased public spending commitments emanating from Westminster which, because Scotland has a larger public sector, have a disproportionately greater beneficial impact here than in the rest of the UK. In other words, even the good news is “Westminster’s fault”.

For business the news on tax is disappointing – a minor tax cut on business rates worth £42m from its tax take of £2.8bn is balanced out by an increase in LBTT, bringing in £39m. Open for business? Don’t make me laugh.

Most eyes were on what Mackay would do with personal tax and predictably he froze Chancellor Philip Hammond’s increase in higher rate thresholds – it is expected he can gain £68m but it will be interesting to see just how much behaviour changes amongst Scottish domiciles. The fact that Scotland has a larger public sector may depress any flitting but it is in the private sector most encouragement is badly needed. 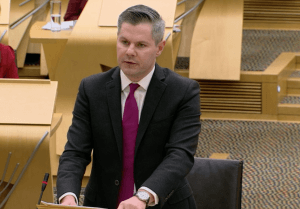 Mackay takes pride in claiming Scotland has the most progressive tax system in the UK but also says Scotland has the lowest tax burden. These claims just don’t marry, but the temptation to try and do both is finessed by increasing taxes on the middle classes while offering a few sweeteners to the lowest paid.

Some people in Scotland might be prepared to pay more taxes if they think they will get better public services, it is a reasonable trade off when there are few private sector alternatives, but I rather think there is a middle class tax revolt coming due to performance failures in education, health, policing and transport. Teacher numbers are down 3,000; 30% of primary pupils are leaving school without the required level of literacy and 25% without reaching target numeracy levels.

When we learn this week that attainment in Higher exam passes has fallen for the third year running and that Scottish pupils with straight ‘As’ cannot get into local medical schools – because our universities want to take fee-payers from other countries – the claim of being “progressive” looks worthless.

I am not alone in thinking the “progressive” route presents difficulties. The Scottish Fiscal Commission believes the diverging rates – that will be significantly higher in Scotland for anyone earning over just £26,000 and especially over £50,000 – will result in revenues falling by £7m in 2019-20 when the point of higher taxes is surely to increase revenues. The reason for this fall is that the commission expects tax residency decisions to be influenced adversely by Mackay’s budgets.

Then there are the oddities, like spending commitments that for a devolved parliament are nothing other than a needless extravagance. Take the External Affairs budget that will increase by 52% from £15.8m in 2017/18 to £24, in 2019/20. Holyrood has no remit for international affairs. Scottish food banks? Austerity? What Austerity?

The fact is that while there have been some lean years the Scottish Parliament’s own independent researchers have confirmed that Westminster’s funding allocation to Holyrood has increased in real terms by £950m since 2010 when the Tories came to power.

So while Mackay expects to raise an additional £68m through his higher tax rates he’s actually receiving a subvention of nearly a billion more than he might have expected – this makes such behaviour look vindictive. It is punishing successful earners merely to strike a pose.

Even with the extra funds at his disposal there were few giveaways that people will notice. Mackay has run out of rabbits, and next year will only be harder. Politically in 2021 it must all end in tears.