News shows among those attracting most TV viewer complaints 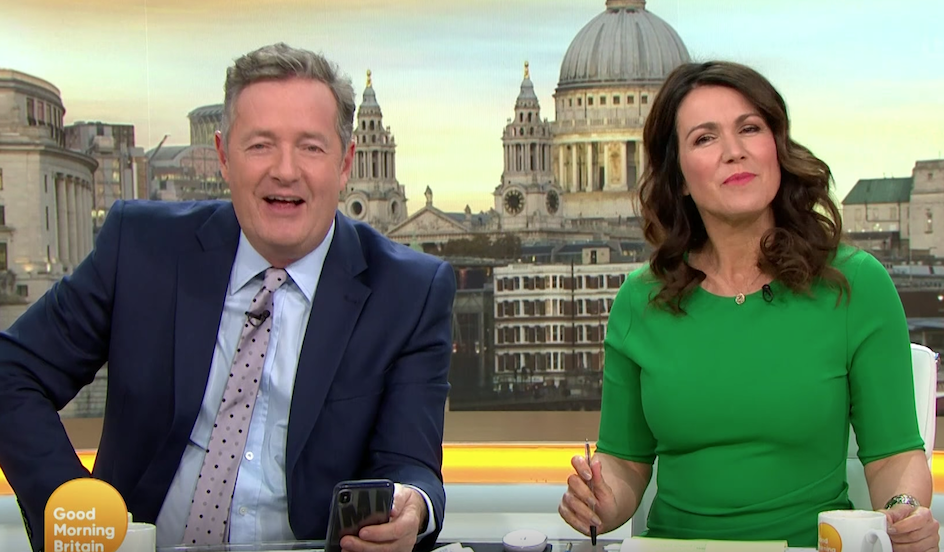 A trio of news programmes – Sky News and the ITV daytime shows Good Morning Britain and This Morning – were among the television programmes which received the most viewer complaints during this year.

Celebrity Big Brother attracted most complaints to Ofcom, attracting nearly half the total. The Channel 5 reality programme attracted 27,602 complaints, mostly related to an allegation of physical abuse made by Roxanne Pallett against Ryan Thomas.

Almost 56,000 complaints were made about programmes from viewers and listeners this year with the top 10 accounting for more than 47,000 – 85% of the total.

Loose Women on ITV attracted the second highest (8,002), with the majority concerning an interview with guest Kim Woodburn.

Ofcom is investigating both programmes to determine whether potentially offensive content was editorially justified and placed into appropriate context. 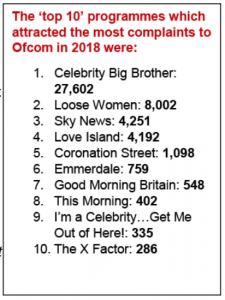 ITV reality shows Love Island, I’m a Celebrity…Get Me Out of Here and The X Factor also featured in the top 10 (ranked 4th, 9th and 10th respectively), along with storylines on Coronation Street (5th) and Emmerdale (6th).

With many complainants now also taking to social media to voice their opinions, many of the programmes that feature in Ofcom’s ‘top 10’, are also among the ‘top tweeted’ programmes of the year, according to Kantar Media research.

Tony Close, Ofcom’s director of content standards, licensing & enforcement, said: “Viewers are as passionate about what they watch as ever, discussing programmes with their friends and family, and with other people on social media.

“They complain to us when they think programmes have fallen below the standards they expect, and we carefully assess each and every complaint we receive.

“This year, we’ve taken action on many occasions where programmes have fallen short of the standards required by our rules.”

Ofcom launched 137 investigations into TV and radio programmes in 2018. Of the 129 investigations concluded this year, it found broadcasting rules were broken in 80 cases. Sixteen cases were resolved, while 33 cases were found not to have breached our rules.

Loose Women: 8,002 complaints (of which 7,912 related to an interview with guest Kim Woodburn which resulted in her walking off set (29 Aug)).

Sky News: 4,251 complaints (of which 3,462 alleged bias in the editing of Tommy Robinson in an interview (27 Sept); and 592 related to comments by Kay Burley’s comparing Simon Weston’s injuries to a woman wearing a burqa (7 Aug)).

Coronation Street: 1,098 complaints (of which 214 related to the storyline involving the date-rape of David Platt and its aftermath (16,19 March); 211 related to Billy Mayhew taking drugs in a church (26 Feb); and 95 related to Pat Phelan’s murder of Luke Britton (5 Jan)).

Good Morning Britain: 548 complaints (of which 86 considered that Piers Morgan displayed bias in favour of President Trump during an interview with Ash Sarkar (12 July); and 74 related to Adil Ray’s introduction of the show as “Good Morning Asian Britain” (13 August)).

This Morning: 402 complaints (of which 133 raised concerns that a guest who featured in a segment about breastfeeding was not sufficiently expert (12 Sept); and 30 related to a discussion about donor breastmilk which complainants considered did not support breastfeeding and promoted formula milk (12 Apr).

I’m a Celebrity…Get me Out of Here: 335: The majority of these complaints (180) related to the use of animals in Bushtucker trials.

The X Factor: 286 complaints (of which 104 related to Cheryl’s routine (18 Nov); and 95 related to sound issues affecting the performances of Danny Tetley and Anthony Russell (3 Nov)).

Under the BBC Charter and Framework Agreement, as set by Government and Parliament, generally Ofcom can only accept a complaint after the BBC has completed its complaints process. This is known as the ‘BBC First’ process.

A breach of Ofcom’s Broadcasting Code is recorded on a broadcaster’s licence. Repeated, serious or reckless breaches can result in Ofcom imposing a statutory sanction. This might include a financial penalty, or in extreme cases, revocation of a broadcast licence. In 2018, Ofcom imposed five statutory sanctions which included the revocation of Ausaf UK Limited’s licence, and financial penalties against JML Media Limited, Karamia Limited, Al Arabiya News and Radio Ikhlas Limited.

There were 16,068 complaints about TV and radio programmes in 2017. The difference year on year is driven by two programmes in particular, Celebrity Big Brother and Loose Women.