Morelos off again as Killie snatch top spot from Rangers 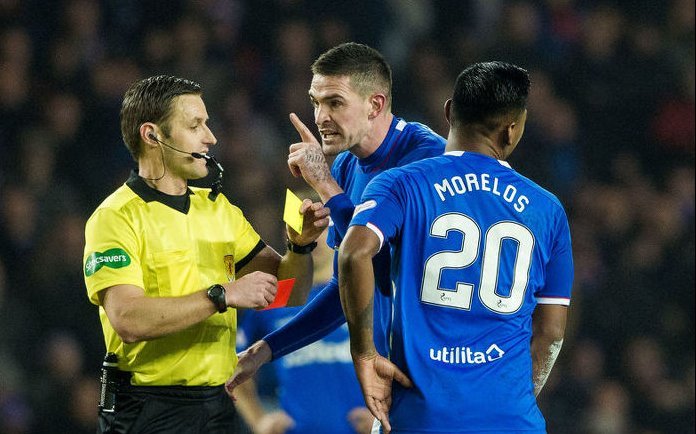 Rangers striker Alfredo Morelos is red-carded during the 1-0 defeat to Aberdeen at Ibrox (pic: SNS Group)

Rangers’ return to the top of the Premiership table didn’t last long with Kilmarnock taking advantage of the Light Blues’ defeat to Aberdeen to leapfrog Steven Gerrard’s side at the summit.

Killie’s 2-0 win over Livingston was their fourth clean sheet in a row and took their run to just one defeat in the last 11 games, continuing the club’s remarkable resurgence under Steve Clarke.

The Dons bounced back from their League Cup Final loss to Celtic with a superb win at Ibrox in a game which saw both teams finish with 10 men, the visitors’ Sam Cosgrove red-carded after just 34 minutes and Alfredo Morelos heading for an early bath after 64 minutes.

Gerrard was forced to defend Morelos’ style of play after stinging criticism from Hearts boss Craig Levein following the Jambos’ defeat to 10-man Gers on Sunday. However, the Colombian’s third red card of the campaign – one was later rescinded – will again put the striker’s discipline under the spotlight.

Already on a caution, he needlessly threw an arm into the face of Graham Shinnie in the second half at Ibrox to leave referee Steven McLean with little option other than to show him a second yellow. 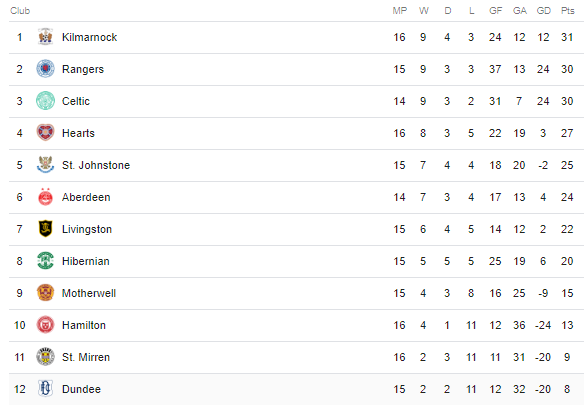 It was an act of folly which angered Gerrard – he has now seen his team collect eight red cards already this season – whose team went top of the table in December for the first time in seven years on Sunday.

“We lost control, we were given another chance back into the game when Aberdeen went to 10 and we never used that advantage in our favour,” he said.

“I had a meeting for 15, 20 minutes on control, discipline and the effect it has on suspensions, so I’m frustrated that we haven’t done anything right.”

Scott McKenna’s early goal was enough to take the points back to Pittodrie, Aberdeen now sitting in sixth place on 24 points, just a point behind St Johnstone who shared four goals with Hearts at McDiarmid Park.

Celtic conceded a late equaliser to Motherwell to miss the chance to take over at the top again, Danny Johnson’s 88th-minute shot cancelling out Ryan Christie’s first-half opener.

At the foot of the table, Kenny Miller blasted a hat-trick as basement club Dundee strolled to a 4-0 win over Hamilton at Dens Park.

Fellow-strugglers St Mirren looked on course for a surprise win at Easter Road only for Hibs to come back twice to draw, Ryan Porteous netting a 73rd-minute equaliser for Neil Lennon’s team.