SNP urged to back Labour option as...

McDonnell expects May to make changes to Brexit plan 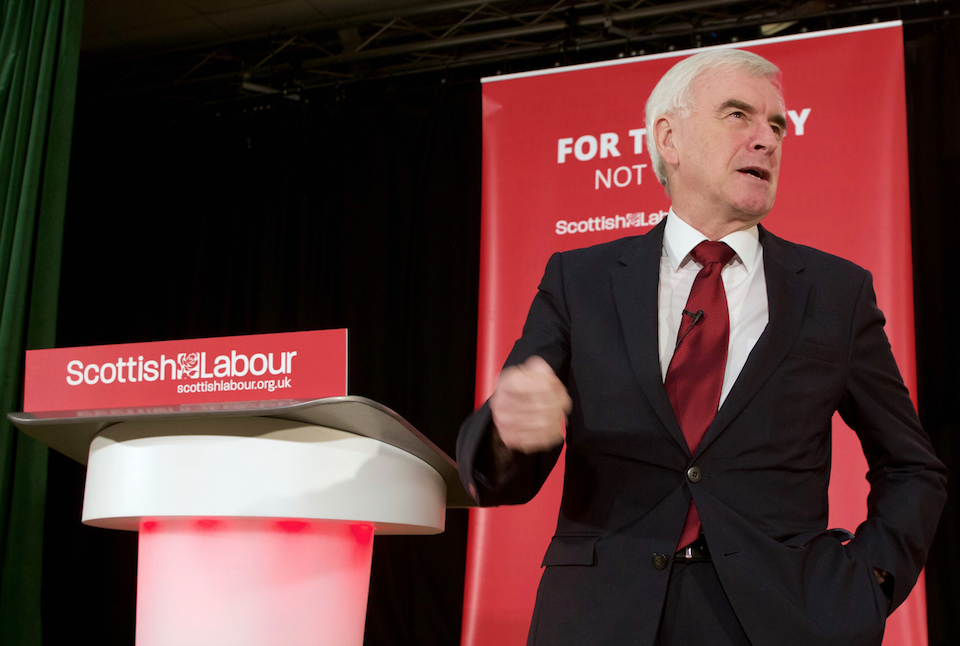 John McDonnell: “Onus is on SNP to back our plan” (pic: Terry Murden)

John McDonnell, Labour’s Shadow Chancellor, said he would not be surprised if Theresa May produced changes to her Brexit plan which faces being rejected in Tuesday’s crucial Commons vote.

His comments came amid claims that the Prime Minister is planning to delay the vote on the withdrawal agreement and go back to Brussels to renegotiate.

Downing Street, however, has rejected this suggestion. A Number 10 spokesman said: “The vote is going ahead on Tuesday.”

Mr McDonnell, speaking to the media before a key speech on the economy to party members in Airdrie, said he fully expected Mrs May to lose the vote, but said it was “impossible” to predict the scale of defeat.

He said he was confused by a statement from Work and Pensions Secretary Amber Rudd who on Saturday offered support to a Norway style deal.

This may mean staying in the single market but having control of agriculture and fisheries and continuing to pay membership fees to the EU. There is also no guarantee that EFTA, which includes Norway, would accept UK membership.

Ms Rudd became the first Cabinet member to speak up for this option, although she also offered her full support to the Prime Minister’s plan.

“I was confused about whether she was proposing Norway Plus or not,” said Mr McDonnell, suggesting it was a disguised leadership bid and dismissing the likelihood of Labour supporting such an option. He insisted Labour was sticking to its own plan. He did, however, expect the Prime Minister to shift her position.

“I would not be surprised if you see other proposals from Theresa May to salvage what is a sinking ship,” he said.

“The scale of defeat is a matter of judgement. Every second Tory seems to be against it. I have never seen anything like it. Someone said it’s like Julius Caesar but it’s more like Up Pompeii [the 70s TV sitcom].”

He added: “We have laid our proposals on the table. We will be pushing our alternative.”

Labour’s plan includes continued membership of a customs union and a “relationship” with the single market.

Asked by Daily Business if this was not really a Brexit plan, but a “half-in half-out” proposal to mollify the two-thirds of Labour voters who voted Remain in 2016, he said: “We are respecting the referendum.”

Mr McDonnell also said it was up to the SNP to respond to Labour’s alternative plan, claiming it was capable of winning cross-party support.

A joint motion was agreed by the SNP, Labour, Greens and the Liberal Democrats in Holyrood last week stating that a better alternative must be found. But Mr McDonnell yesterday gave no indication that the SNP would support Labour’s plan, despite claiming it could control a majority of MPs.

“The onus is on the SNP to respond to our proposal,” he said.

The SNP has tabled a cross-party amendment to the Prime Minister’s proposed Brexit deal which seeks to extend Article 50 to prevent the UK crashing out of the European Union without a deal.

The amendment, which has been co-signed by Plaid Cymru, also calls on the UK government to respect the will of the Scottish Parliament and the Welsh Assembly – both devolved parliaments have rejected the withdrawal agreement.

John McDonnell said Labour will scrap employment laws introduced by the Conservative government which he claimed are among the most restrictive in the western world.

He recalled the spirt of workers at the Rolls-Royce factory at East Kilbride in the 1970s in the aftermath of the Chilean junta’s overthrow of a democratically elected government.

They refused to carry out the vital repairs of engines for Hawker Hunter fighter aircraft, used during the brutal right-wing military coup on 11 September 1973. Their story has been told in the recently acclaimed film Nae Pasaran and one of those who participated in the action – John Keenan – addressed party workers in Airdrie yesterday.

Mr McDonnell said: “The next Labour government will ensure workers can revive the spirit of the Rolls-Royce workers in East Kilbride, when they struck a blow against the brutal Pinochet dictatorship.

“In this way, we will open the next chapter of democratic society by enhancing democracy at work.

“Our programme of workplace reform will restore the balance between employer and worker, and it will do so by installing basic trade union rights in law again.

“A Labour Government will transform the world of work, providing security, decent pay and equal rights for people from day one, including sick pay, holiday pay and protection against unfair dismissal.

“We will introduce a new Ministry of Labour to give workers a voice in parliament, sectoral collective bargaining to raise wages and conditions, and repeal dangerous anti-trade union legislation.”