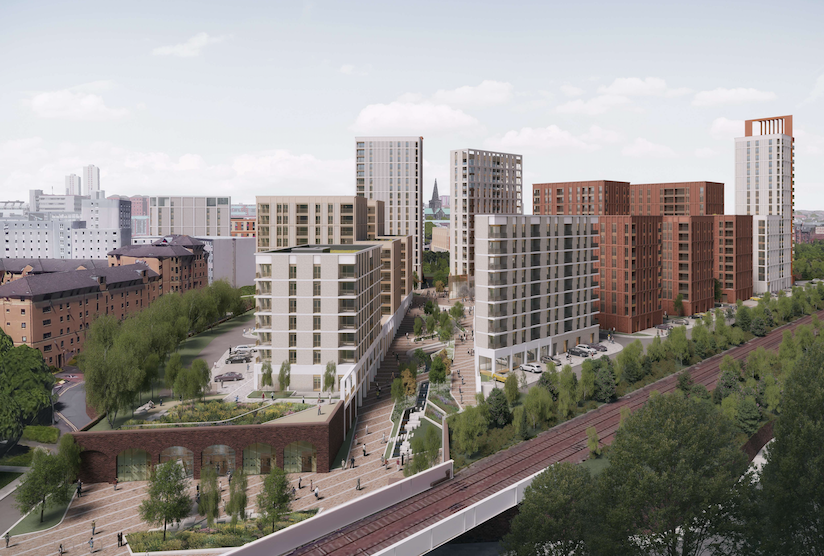 New neighbourhood: the development will link the east end and the Merchant City

A £200 million development in Glasgow, Scotland’s largest build-to-rent scheme, has secured backing from the city council and will see a derelict site transformed into a new residential neighbourhood of 727 homes.

The 7.5-acre site behind High Street rail station will feature a public square, 99 student studios and approximately 3,365 sq m of space for retail, leisure, food and drink and commercial business.

The proposals, by an Investment partnership behind Get Living, will include a tree-lined access route connecting for the first time the Merchant City through to the East End via High Street.

Work on the first phase of the development is expected to start next year, subject to building warrant.

Other than a section currently used as a car park the site has lain vacant and derelict for many years. The Molendinar Burn, the original freshwater source upon which Glasgow was founded, passes underneath the site.

Throughout its history, the area has been home to the original Glasgow University and the Hunterian Museum. Most recently the City of Glasgow Union Railway Company used it as a goods yard.

Glasgow-based architects Stallan-Brand, who worked on major development projects in the city including the 2014 Commonwealth Games Athletes’ Village and Tron Theatre, created the masterplan.

This new district for Glasgow will be operated and managed by Get Living, the large-scale residential investor which is an established operator in the UK’s Build to Rent sector. It operates more than 2,000 homes in London and is best known for East Village, the former London 2012 Athletes’ Village.

Build-to-rent homes are designed specifically for renting and are professionally managed. The sector can help alleviate housing shortages in city centres, with properties typically brought to the market and occupied more quickly than for-sale developments.

Rick de Blaby, executive chairman, Get Living, said: “It will bring much needed, in-demand, high-quality homes for rent to the heart of the city.

“With a wealth of commercial developments in the city centre and on the waterfront of the river Clyde, it is an exciting time for Glasgow and it is fantastic to be able to say we are now a part of its ongoing revitalisation.

“We have listened carefully to the views of local businesses and the people of Glasgow in forming these ambitious plans. Now, as long-term investors, we will build on those relationships even further in the years to come and look to become part of Glasgow’s Civic Family, delivering a new area of the city’s fabric with important historical significance.

“This development is a significant step forward for our investor group and the city.”

Stuart Patrick, Chief Executive, Glasgow Chamber of Commerce said: “This development will completely overhaul a key area of Glasgow, located right on the cusp of the city centre in an ideal location.

“It is an impressive and extensive scheme in both its scale and ambition, creating hundreds of high-quality homes alongside competitively located commercial space.

“Attracting people to live centrally is a key priority for our urban planners, driving sustained volumes of footfall for the retail and leisure sectors whilst also bringing skilled workers closer to their jobs and reducing travel demand.

“There is currently a reassuringly positive momentum for new developments springing up around Glasgow, such as the Barclay’s Buchanan Wharf announcement or the new headquarters for the Clydesdale Bank and these new homes are likely to prove attractive to many who will be employed in these developments.

“Securing planning permission is an important milestone and we’re looking forward to watching the progress of Glasgow’s newest neighbourhood.”