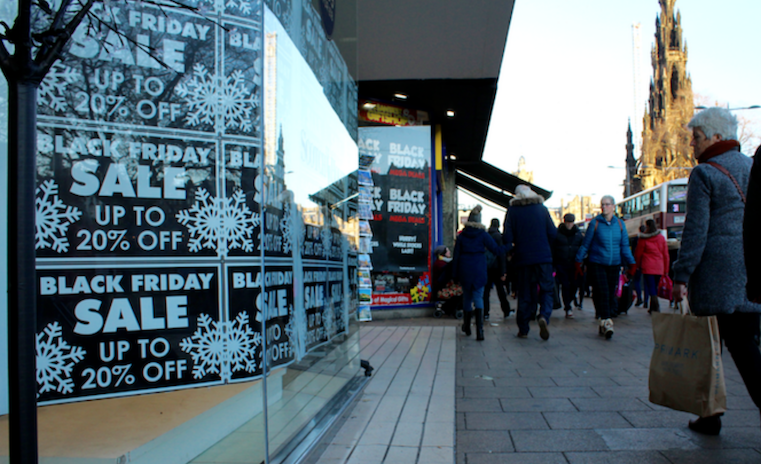 Black Friday sales helped retailers defy expectations and report a significant leap in sales in November, according to new data.

Sales were up by 5% compared to the same period last year. This was significantly above consensus expectations, suggesting that the Black Friday sales were more popular than most had anticipated.

The volume of purchases was also up, by 3.6% compared to 2017. This, according to Schroders, suggests discounts were not so generous this year, as retailers increased prices on average.

In November, online sales as a share of total retailing exceeded 20% for the first time, with online spending accounting for 21.5% of the total. There was a 13.1% increase compared to November 2017 as both apparel retailers and households goods stores reported over 20% increases year-on-year.

On a gloomier note the CBI Distributive Trades Survey said retail sales volumes fell notably in the year to December, and at the fastest rate since October 2017.

A number of retailers have been issuing profit warnings in the last few weeks, complaining of rising costs and excessive discounting in recent months which has hit profits. This was not only limited to traditional physical stores but also some of the largest online retailers too, with shares hit as a consequence.

But the ONS figures show that household goods sales leapt by 5.3% on the month in November, the biggest increase since the end of 2013 and driven by an 11% increase in electrical appliances.

“Retailers reported strong growth on the month due to Black Friday promotions in November,” it said, “which continues the shifting pattern in consumer spending to sales occurring earlier in the year.”

EY Item Club said: “This was somewhat at odds with survey evidence for November from the BRC and earlier reports of a disappointing Black Friday from a number of retailers.”

EY’s Howard Archer warned that: “The strength of retail sales over Christmas should really only be judged after all the data for November and December are available.

“It is notable that the CBI survey showed retailers are pessimistic about sales prospects in January, with a balance of 0% expecting year-on-year increase in sales volumes.”

Ed Monk, associate director for personal pnvesting at Fidelity International, said: “November was boosted by Black Friday, which has brought forward the traditional Christmas sales glut by a month.

“It’s welcome news after a tough year for UK retail sector which has been undermined by tepid wage growth and Brexit worries. Traditional retailers with a presence on the High Street have been most at risk, and Fidelity’s real estate team predicts a steep fall in retail rents and property values because retailers simply cannot afford the high prices of rent on the high street.

“But we see today that many retailers aren’t putting up good fight. Their strategy thus far has been to extend Black Friday with early discounting throughout the month. That’s a squeeze on profits but good news, at least, for consumers who are finding more affordable prices.”