Unite offers ‘flexibility’ plan to save jobs at Michelin plant

Plan would reduce activity but could save plant

Trade union Unite has revealed it has been working on a proposal over the last two months to secure the future of the Michelin tyre factory in Dundee.

It said the ‘flexibility agreement’ would allow for a phased reduction in the workforce in line with shrinking demand, but would see the factory stay open.

The proposal was drawn up after the company said in September production was being impacted by deteriorating market conditions in Europe, primarily due to an influx of cheap tyres from Asia and lower demand for premium tyres of smaller dimensions, which the Dundee factory specialises in.

Unite’s plan is designed to mitigate the current market conditions in order to ensure the financial viability of the factory over the long term.

It was this plan that Unite representatives believed they would be signing-off after consultation with the workforce this week. Unite had no prior knowledge of the company’s closure announcement.

The flexibility agreement proposes a potential two-phase plan, which would be monitored on an annual basis.  In the first year it would have seen the workforce voluntarily reduce by a number of jobs and a move to a different production regime of four set shifts.

The current shift pattern is five set shift rotation on a monthly basis. In year two (2019/20), if market conditions had not improved, Unite’s plan included an option of further voluntary redundancies and a move to a three set shift pattern.

The flexibility agreement plan ensured no reduction in terms and conditions over this period for the remaining workforce.  At the end of this period, Unite and the company would re-assess the market situation.

Unite has also today held meetings with Economy Secretary Derek MacKay and Dundee City Council to discuss the immediate establishment of an Action Group that will work towards keeping the Michelin factory open. In addition, Unite has held further meetings on site with company management and the Cabinet Secretary.

Marc Jackson, Unite Michelin convenor said: “It is important to stress to the workforce and the wider community in Dundee that Unite has a viable plan on the table. It is a plan that can work for the workforce and the company. The flexibility agreement, which we believed would be signed-off this week, takes into consideration the current challenging market conditions but we have a plan in place to manage this situation over the coming years.

“The creation of an Action Group involving Unite and other key stakeholders is an important and positive step forward. The workforce can be assured that Unite will work tirelessly to ensure that this flexibility agreement is reconsidered by the Michelin Group and that the factory can stay open.”

According to a Scottish government statement, Michelin confirmed it will look in detail at any proposals for the future of the plant that are brought forward by the action group or trade unions. 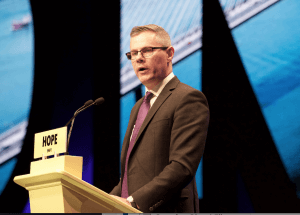 Mr Mackay (pictured), said: “I have met members of Michelin’s group executive and they have agreed to consider a proposition that we will bring forward, to secure a sustainable future for the plant.

“I will be convening an action group to explore all options to secure a future for the plant and its highly-skilled workforce.  I will chair an initial meeting in Dundee on Monday with the action plan being taken forward by Steve Dunlop, chief executive of Scottish Enterprise, and council leader John Alexander.

“Having spoken to the council, the unions, local politicians and UK Government, I am confident there is a shared desire to work together to secure the best possible future for the site and its workforce. At the same time we will work with the unions and the local management to provide the best possible support to the workforce at this very difficult time.

“We have been working with Tay partners to complete the arrangements for the £300 million Tay Cities deal and an additional £50 million package. We stand ready to move forward with the Tay City Deal as soon as possible and call on the UK Government to bring forward additional measures and investment, in light of Michelin’s announcement.

“Dundee has undergone a major transformation in recent years and a great place to do business. The Scottish Government will work with everyone across Dundee in our efforts to ensure there continues to be a vibrant future for manufacturing in Dundee.”

John Alexander leader of Dundee City Council, added: “We welcome the leadership shown by the Scottish Government in creating an action group and ensuring there is a robust response to this difficult situation.”