Another week and another marathon parliamentary statement on Brexit from the Prime Minister, this time on the Draft Political Declaration. Unfortunately for Theresa May, just like her previous announcement on the Draft Withdrawal Agreement, the provision of greater detail has only provided more ammunition for those who believe Brexit has taken the wrong course.

In particular the SNP will use the latest document as a big stick to beat the 13 browbeaten Scottish Conservatives who have made the revival of the Scottish fishing industry their cause celebre.

They are under the cosh because having made solemn commitments in election campaigns, public statements and letters to the Prime Minister – including threats of resignation – there is a growing whiff of rotting haddock coming from the British government’s commitment to future fisheries policy.

Earlier in the week the First Minster Nicola Sturgeon visited Westminster to try building a coalition to defeat Theresa May’s Draft Withdrawal Agreement, and now the Draft Political Declaration will undoubtedly strengthen her hand. Sturgeon’s discussions had the hallmark of a media stunt of demonstrating leadership when she doesn’t even have a vote in the process. The sense she was playing to the gallery was strengthened by her only meeting political groups that had already announced they would be voting against the Prime Minister’s Withdrawal Agreement.

The Liberal Democrats, Greens and Plaid Cymru, together with 35 SNP MPs, are all committed to voting it down. The real problem is if Jeremy Corbyn cannot enforce discipline within his own ranks by discouraging Labour Europhiles from voting with the government to get the deal through, and in this sphere the First Minister has no influence to offer.

It was also noticeable that while Sturgeon took the time to receive an official update on the detail of the proposed agreement from the Prime Minister, and then met Corbyn to discuss a coalition of opposition, she did not meet with the DUP nor representatives of Conservative opponents  – whose votes make a government defeat possible.

The parliamentary arithmetic suggests she should have at least made more effort courting Tory remainers who are equivocating about which way to vote. May requires 320 votes to get her Withdrawal Agreement approved but when the Tory payroll vote (Ministers, whips and parliamentary secretaries) is added together with devout Tory remainers and a possible 20 Labour rebels the total only comes to 255. May needs to get the number of Labour rebels up to nearer 60 to win – but with every Tory MP that announces opposition that number rises. 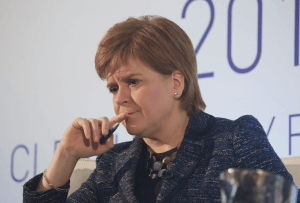 It is in the number of Conservative opponents to the deal that the SNP needs to help grow, and by encouraging Scottish Conservatives into voting against their government to reduce the possibility that Labour rebels could save Theresa May’s deal.

Now the Draft Political Declaration just made that task easier and SNP Brexit minister Michael Russell was not slow to try to embarrass Scots Tories by Tweeting how section 75 breaks a commitment not to link fisheries access and quotas to any future economic deal. The prospect of a trade-off where Scottish fishermen are sold out for some other national priority can now be seen in black and white.

Not surprisingly Scottish Conservative backbenchers recognise they are being caught in a classic pincer move whereby they want to believe their prime minister but are being taunted by the SNP about the official paperwork that contradicts the PM’s every statement. Yet again she swore before MPs that there would be no trade off – but this is the same person who has said on record 32 times that “No deal is better than a bad deal” only to go back on her word and is now saying it’s her deal or no deal.

For Scots Tories the choice is voting for the PM’s plan and possibly facing the wrath of the public if, down the line, Scottish fisheries are sacrificed – or voting against the deal and possibly ending May’s premiership.

Thanks to Sturgeon’s unbridled animosity to Scottish Tories she is not able to court them or win them round to her point of view – instead all she can do is shame them into voting against their prime minister with the threat they will not only lose their own seats and cost Ruth Davidson her chance of becoming First Minister in 2021.

Taunting and shaming are rather blunt instruments that can be counter-productive rather than establishing a true consensus that a coalition requires. Not for the first time are the First Minister’s ideological prejudices getting in the way of political pragmatism.