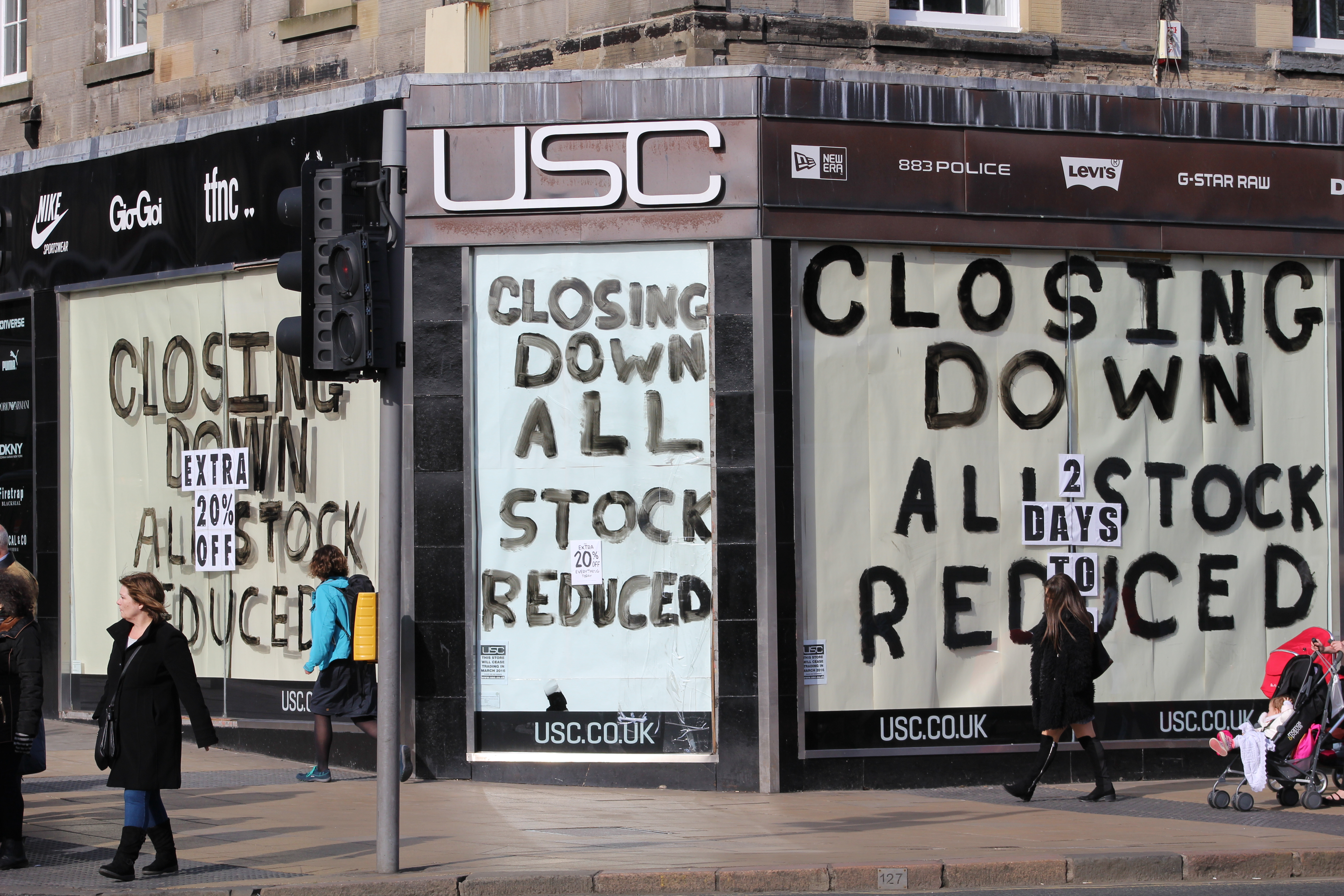 Retail blight: stores have been closing in all towns (pic: Terry Murden)

Shop closures are accelerating around the country leaving retailers fearing a Christmas roasting, according to new research.

Closures are a result of the growth in online shopping, a shift to in-home leisure, heightened restructuring activity and continued digitisation of services.

In Scotland, nine towns and cities are evaluated in the study. Aberdeen fared worst in relative terms, with 4.24% net closures. Edinburgh saw a net reduction of 13 stores and Glasgow 11, to 992 and 887 stores respectively. The only areas to see an increase in store numbers were Ayr and Leith, in Edinburgh, which both increased by one net store (see table 1).

The data also reveals the extent of the migration from high streets to retail parks. Over the period measured 67 high street stores closed and 40 stores in shopping centres, while the number of stores in retail parks remained static (see table 2).

The analysis highlights changes in Scots’ consumer habits with men’s and women’s fashion shops among the most affected as shoppers move online. Kitchen planning shops, opticians, shoe shops and banks were other categories which saw notable net closures.

Mark Addley, head of restructuring for PwC in Scotland said: “Our analysis reveals a retail map which is continuing to change beyond recognition from a generation ago. The convenience of online shopping is making its mark on the high street, and we expect this will lead to retailers having to re-evaluate the purpose of their bricks and mortar operations.

“The number of high-profile retail casualties in 2018 has made headline news, while the volume of distressed businesses this year has led to a spike in company voluntary arrangements (CVAs). While these measures can help alleviate short term distress they are not a viable long-term solution unless there is a fundamental change to the business model.

“The intensity of the current retail climate which is being felt across Scotland’s towns and cities highlights that restructuring and new investment are required, but so are new ways of thinking.

“Retailers of all sizes will be hoping for a strong festive trading period, but we must bear in mind that the peak time period for new CVA announcements is first quarter of the New Year, so we should brace for more high street closures in the coming months.”

The picture across Great Britain

Data reveals that across multiple retailers in 500 town centres, the impact of CVAs and retail administrations has introduced new categories to the fallers list. Electrical goods and Italian restaurants are particularly prominent. This is due to the demise of Maplin (more than 50 of its locations were among the top 500 locations assessed in this research), and CVAs announced by Jamie’s Italian and Prezzo, in addition to general closures by Strada.

In addition to the closures in the retail and leisure sectors, many traditionally store-based service businesses, such as banks, estate agents, recruitment agencies and travel agents, have continued to move online, albeit their rate of closure has slowed as fewer of these types of businesses remain on the high street.

“Looking ahead, the turmoil facing the sector is unlikely to abate. Store closures in H2 due to administrations and CVAs will further intensify the situation.

“The British high street is in urgent need of new ways of thinking and new forms of retail. Encouraging this should be a priority, and it remains to be seen if recent packages of support for the high street and reductions in business rates for smaller retailers will be sufficient to stimulate this.”

Responding to the research, David Lonsdale, director of the Scottish Retail Consortium, said: “These figures demonstrate just how challenging and volatile times are just now for Scotland’s retail industry, as shown by several casualties of late on our high streets.

“This is hugely challenging at a time when retailers are forking out more for public policy induced costs such as the apprenticeship levy, business rates, and the large firms’ business rates surcharge.

“These figures should serve as a wake-up call to policy makers, with a far greater focus brought to bear on reducing the costs of doing business.”

Linkedin
PwC retail report, shops closing News, Scotland, UK No Comments » Print this News
Scotland will be the loser in tax competition Previous News
Next News Night to remember for Celts but one to forget for Rangers