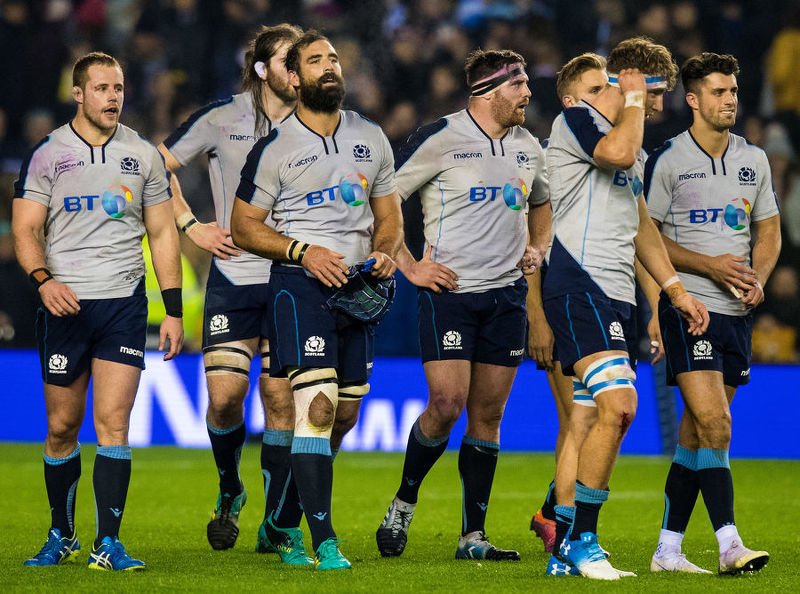 Scotland players troop off at full-time after their defeat to South Africa at Murrayfield (pic: SNS Group)

Despite a valiant effort, Scotland found South Africa too tough a nut to crack as the Springboks earned just their third win away from home this year.

The visitors represented a significant step up in class from last week’s Fijian test and demonstrated why Gregor Townsend rated them as one of the world’s form teams going into the clash.

A rip-roaring opening half saw the Scots go in trailing 20-17, Peter Horne and Hamish Watson touching down for the home side with Jesse Kriel and Handre Pollard going over for South Africa.

Scotland had a golden opportunity in the second half after Willie Le Roux was sin-binned for a deliberate knock-on but they failed to take advantage of their numerical superiority only managing to exchange penalties during the period.

Elton Jantjies sent over a decisive penalty in the closing stages to stretch his team’s lead to six points and although the Scots battled to the end, there was no way through a powerful South African defence.

Worryingly for Townsend, the impressive Stuart Hogg limped off near the end after appearing to twist an ankle.

“I’m disappointed for the team, a lot of effort went into that performance and there were some great moments that got us back into the game,” said Townsend. “There were some moments in the second half when we could have, or should have, kicked on but the effort the players put in was outstanding.

“We’re a team that’s learning every time we come together and it’s painful losing but we’ll learn and be a better team for it.”