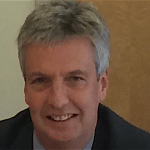 The new CEO will be responsible for steering the Edinburgh-based developer’s next phase of growth. Afton marks the company’s first onshore wind development.

Mr Madgwick (pictured) has more than 30 years of experience working within the European energy industry. He spent his early career as a geologist within the oil and gas industry before moving into the power sector, and has championed renewables and sustainability for the last fifteen years in senior leadership roles with major utilities and private companies alike.

Mr Madgwick said: “Having been involved in renewable energy since 2005, I have seen the vast potential realised both onshore and off our coasts with technology and innovation exceeding all expectations.”

Red Rock Power is the Edinburgh-based subsidiary and European headquarters of SDIC Power, a power generation company headquartered in Beijing, China. The developer has ambitions to grow its portfolio through merger and acquisition and offshore leasing opportunities.