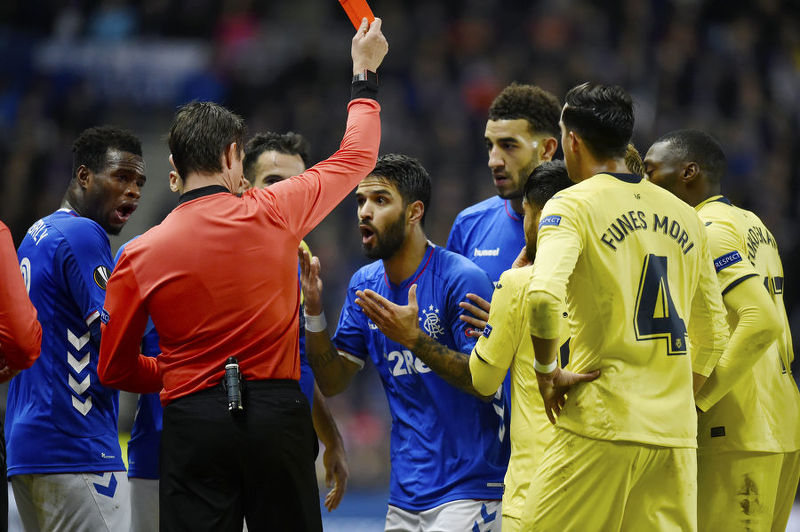 Rangers had to play the entire second half with ten men after Daniel Candeias’ red card against Villareal (pic: SNS Group)

The prospect of Celtic and Rangers playing in Europe after Christmas remains very much alive after a dramatic night of action left both sides within reach of the last 32 with one game left.

Brendan Rodgers’ side managed the victory they were looking for in Norway, Scott Sinclair proving the match-winner with the only goal of the game.

It was a merited win for the Parkhead outfit, who will progress from Group B with a draw against Salzburg in Glasgow in a fortnight.

With Rapid Vienna having beaten Spartak Moscow in Russia before Rangers kicked off against Villareal, Steven Gerrard knew he’d be going into the last match in Austria with a chance of qualifying regardless of the result at home to the Spaniards.

It was still a magnificent point for the Gers, who played the second half with ten men after the dismissal of Daniel Candeias on the stroke of half-time.

Not for the first time in this campaign, Allan McGregor was the Ibrox hero with a number of superb saves to keep the score level.

It sets up fascinating last matches in two weeks’ time for the two Old Firm managers, a scenario both would have taken before a ball was kicked in the groups.

Celtic’s European destiny remains in their own hands after a milestone victory in Trondheim put them within touching distance of the knockout stages.

Scott Sinclair’s first-half header was enough to give the Hoops their first away win in the Europa League since the tournament’s rebranding nine years ago – at the 17th time of asking.

It was no more than the Glasgow side deserved having dominated proceedings and with Salzburg beating Leipzig to go through as Group B winners, a point from their meeting with the Austrians at Parkhead will be good enough to see Celtic progress.

Rodgers is confident that his players will rise to the occasion in front of a passionate home crowd.

“We will be playing against a good side but we want to go and win the game and use the whole Celtic Park experience and atmosphere to push us over the line,” he said.

“It will be a fantastic demonstration of the Celtic support what that synergy between them and the team is all about.

“It has been a great learning campaign for us again. We knew we had to win here and to see the players under that pressure and play with that level of control was very pleasing. That, along with the result, makes it a very good night for us.”

The Northern Irishman added: “It is very hard to just play for a point and a draw. We want to go and win the game and use the whole Celtic Park experience and atmosphere to push us over the line.”

Rangers, meanwhile, had to rely on another backs-to-the-wall performance after Candeias’ dismissal, albeit the wide man can feel unfortunate to have picked up a second yellow card for a foul on Santiago Caseres.

The defence proved up to the task, though, repelling everything the La Liga side could throw at them to earn a hard-fought share of the spoils.

Scotland keeper McGregor has been in the form of his life this season and he produced another two fine stops to deny Karl Toko Ekambi when the striker looked favourite to score.

Had it not been for an offside flag in the closing minutes, Glenn Middleton would have given his side a famous victory.

It wasn’t the result Gerrard had been looking for prior to kick-off but Rangers will be happy to have taken something from the game given how the action unfolded.

They can now regroup and head to Vienna knowing victory will carry them out of Group G and into the last 32.

“We always felt it was going to go to the wire,” said Gerrard. “We have set up a fantastic game.

“From where we were 12 months ago to have the opportunity to get three points and go to the last 32…I can’t wait for it. It will be a fantastic occasion for them.

“Our keeper was world class again but as a team defensively we were excellent to a man.

“This feels like a win for us. There is still 90 minutes of football to be played and we have given ourselves an unbelievable opportunity to get into the last 32 and that’s all that matters right now.”