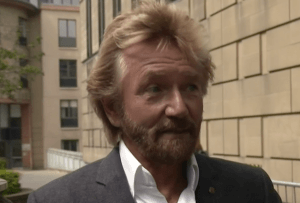 TV and radio celebrity Noel Edmonds is this week expected to serve his £64 million lawsuit against Lloyds Bank.

Mr Edmonds, who has pledged to donate a large part of any award he receives to a charity for banking victims. will lodge a pre-case letter this Wednesday, although the formal claim may not be filed until early December.

Edmonds claims that his firm, Unique Group, was pushed into failure by fraudsters at the Reading branch of HBOS, which Lloyds acquired at the height of the financial crisis.

Bank staff from the branch were jailed last year for the £245m loans scam, which destroyed several businesses and saw those convicted spend the money on luxury holidays and other personal pleasures.

Mr Edmonds raised the issue at the Lloyds Banking Group agm in Edinburgh earlier this year when he alleged the bank “groomed, pillaged and destroyed” his company, Unique Group.

The bank said it continues to make good progress compensating the approximately 70 customers impacted by the fraud and is still waiting for Mr Edmonds to file his legal claim which it will contest.

Mr Edmonds told The Guardian newspaper that he has already lodged an application with the Charity Commission to register his White Horse Trust – a reference to Lloyds, which is known as the Black Horse bank.