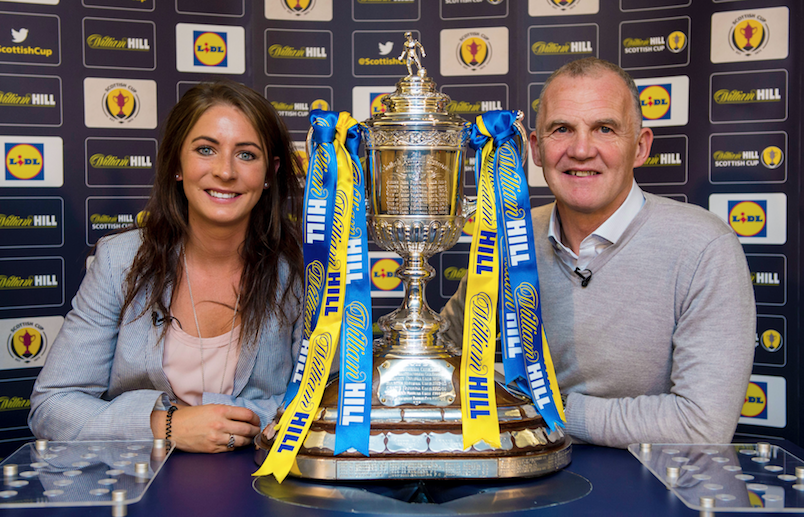 British Olympic Curler Eve Muirhead and former Kilmarnock player, Roy Montgomery at the draw for the Second Round of the William Hill Scottish Cup

More Scottish Cup matches will be shown on free-to-air television under a six year deal signed by the Scottish FA with IMG to globally market broadcast rights.

BBC Scotland and Premier Sports will each broadcast a selection of fixtures in the competition.

The deal will extend IMG’s relationship with the Scottish FA to more than 20 years and includes live coverage from every round as well as gaming, archive and digital clips rights. It will run until the end of season 2023-24.

BBC Scotland promises to add depth to its broadcast coverage of the Scottish game and will support the promotion of the tournament across the country. From season 2019-20, BBC Scotland will also showcase one live match in Rounds 1 to 3.

Supporters will be able to watch four live matches in Rounds 4 to 6, with both broadcasters each screening two live games per round on an exclusive basis. In the later stages of the tournament, Premier Sports will broadcast one semi-final exclusively while the other semi-final and the final will be shown across both channels.

Scottish FA Chief Executive Ian Maxwell, expressed his enthusiasm over the new broadcast deal, saying: “The William Hill Scottish Cup is a tournament that is steeped in history. In it, the clubs and players have created countless unforgettable memories and this deal will ensure that more action than ever before will be broadcast live to the nation.

“It will also drive significant revenue back to all the clubs who participate in the competition, ensuring ongoing investment into the game. We look forward to working with Premier Sports and the BBC to help us continue to tell the stories and cover the action of our top knockout competition.”

Michael Mellor, SVP, Football, IMG Media, said: “The Scottish Cup is one of the oldest competitions in world football and this new agreement with our partners at the Scottish FA will take us through to the 150th anniversary of the first one played in 1873/74.

“We look forward to ensuring this prestigious tournament is viewed as widely as possible on broadcast platforms around the globe.”