Victory sets up Scots for play-off against Finland 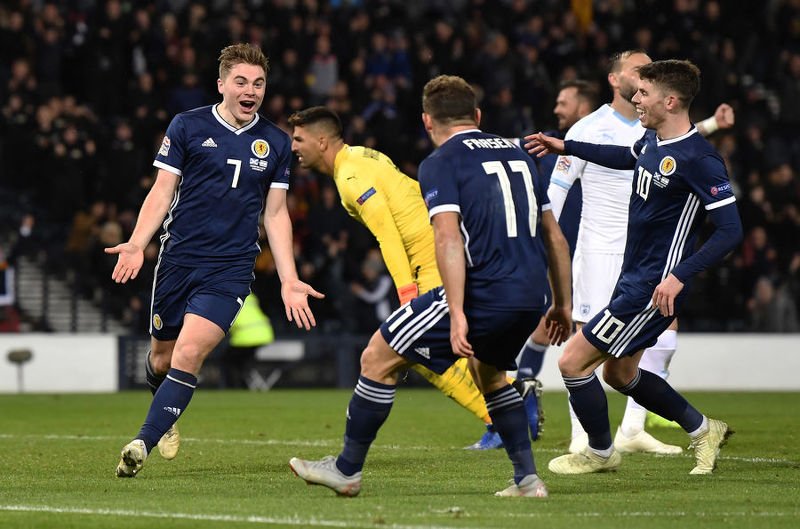 In a business that is driven by results, Alex McLeish won’t care that his Scotland side made heavy weather of getting the better of Israel in their must-win clash.

The victory took the Scots to the top of Group C1, earning them promotion into Group B and, more importantly, securing a play-off spot for Euro 2020.

The one-legged semi-final tie against Finland will go ahead at Hampden Park in March 2020 with the final just three days later – but only if they have not already qualified for the Euros through the qualifying groups.

The final whistle sparked scenes of great celebration in the home camp, yet when the draw was made, nothing less than topping a group involving Albania and Israel would have been acceptable.

In-form James Forrest was the Scots’ hero, bagging a hat-trick to take his tally to five international goals in two games after his double against Albania, in the process becoming the first Celtic player to score three goals in a game for Scotland in 110 years.

“It’s a great night,” he said. “It showed a lot of character that we kept going and we managed to get the goals.

“You need to be contributing either goals or assists and I’m delighted with the last couple of games to be doing that.”

It was a night which frayed the nerves of the Tartan Army, with the home side falling behind early in the first half through Beram Kayal’s long-range effort.

Two excellent strikes from Forrest in the space of nine minutes as the interval approached swung the game in favour of the Scots, whose fighting spirit provided the foundation for the crucial win.

When Forrest added a third after 64 minutes it looked like job done for McLeish but Eran Zahavi’s shot 15 minutes from time set up a nail-biting finale.

While Forrest grabbed the headlines with his goals, Allan McGregor kept his side in the game with a superb one-handed save to keep out a volley from Tomer Hemed in the closing moments.

“We didn’t start so well but played some great football for an hour,” said McLeish, who has now won three of his four competitive matches in charge.

“I have got to be absolutely proud of the guys. We managed the game, I thought, particularly well.”

The Euro 2020 draw is made in Dublin on 2 December. There are 10 groups, with the top two qualifying for the finals. Four more will make it through via the Nations League play-off spots.