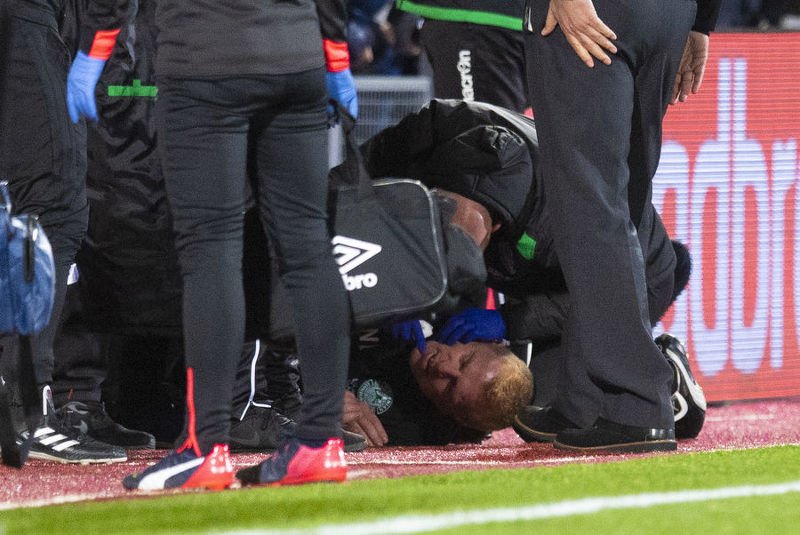 Hibs manager Neil Lennon needed treatment after appearing to be hit by a missile at Tynecastle (pic: SNS Group)

Hibs manager Neil Lennon was struck by a coin and Hearts goalkeeper Zdenek Zlamal appeared to be struck by a fan when he attempted to retrieve the ball.

Scottish FA Chief Executive Ian Maxwell said that both assistant referees, Frank Connor and David McGeachie, were hit by objects during the game, understood to be plastic cigarette lighters and coffee cups. A 25-year-old man has been charged with assault.

SNP MSP James Dornan claimed the SFA and SPFL are incapable of policing Scottish football and warned that someone is in danger of being seriously injured or even killed unless strict liability is introduced.

He is working on a strict liability bill that would, if passed, see sanctions brought against clubs regardless of the measures they have taken.

The joint statement from Hearts and Hibernian said: “The two clubs are united in their condemnation of the isolated events which marred an otherwise compelling fixture, and will together work with Police Scotland to ensure those individuals concerned are identified and face appropriate sanctions.”

“I can confirm we are investigating two separate incidents involving the Hearts goalkeeper and the Hibernian manager during the match.

“A 25-year-old-man has been arrested and charged for an assault involving the assistant referee.

“A total of five arrests have been made during the evening. Anyone who witnessed these mindless acts should contact the police on 101.”

She said: “The only thing we can do is retrospective and that is using the CCTV to identify the individuals and asking our supporters, and this happened last night which is good, to speak up if they see something of this nature happening.

“The majority of supporters don’t want these things to happen, and we need to encourage them to help us identify the individuals who are doing it.

“We don’t want people who do that sort of thing involved in football.

“It brings the whole game into disrepute and a lot of us are working very, very hard to try and improve the situation at football and make it an experience that families can enjoy. We really have to do everything we can to ensure this doesn’t happen.”

She added: “While coin throwing incidents are awful, the other things I feel very strongly about are the pyrotechnics. The number of flares that went off last night was also incredibly disappointing. So I won’t be surprised if the authorities take some action.”

CEO of Hibernian Leeann Dempster has called on help from supporters to identify those responsible for the “potentially dangerous behaviour”.

Dempster said: “The two clubs are united. This kind of behaviour is simply not acceptable. We do everything we can to ensure that we run matches in a way that is safe for everyone involved. Players, coaches, supporters, the media, everyone who goes to a football match is entitled to enjoy the match in safety and security.

“We will not allow the mindless actions of a few foolish individuals to jeopardise that. We will learn any lessons that we can from this, but we would also call on supporters to play their part in helping us to identify those responsible for this kind of unacceptable and potentially dangerous behaviour.