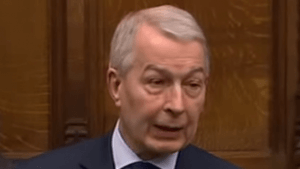 The chairman of a powerful group of MPs today accused Johnston Press’s new owner of walking away from responsibility for its pension scheme.

Frank Field (pictured), who chairs the Work and Pensions Committee, has written to the industry watchdog wanting to know what discussions took place that allowed JPI Media to acquire the 200 titles, including The Scotsman, and then dump its pension debts on the state.

Labour MP Mr Field has asked Lesley Titcomb, chief executive of the Pensions Regulator, for a “detailed explanation” of her organisation’s engagement with Johnston Press on its pension scheme, which has now entered the Pension Protection Fund (PPF) despite the company having been bought by another media organisation.

In particular, he has queried ”why it was not possible to find a solution that would have avoided the pension scheme entering the PPF.

“It is difficult to understand why it is possible for JPI Media to acquire the business, no doubt in the expectation of generating a profit from it, but without taking any responsibility for its pension scheme.

“Do you consider that adequate protections are in place to prevent schemes being dumped on the PPF, at cost to pensioners and levy-payers?”

The JP pension scheme had a deficit of £40 million. Entering the PPF is likely to see JP pensioners take a cut of between 10% and 30% of the payouts.


One pensioner contacted Daily Business to say he had yet to receive any communication from the new company which acquired the business on Saturday in a pre-pack administration. The former management effectively stays in place, but the former bondholders and new owners, led by US hedge fund Golden Tree Asset Management, have written off 60% of the £220m debt and injected £35m of new money into the business.

The former JP journalist, who requested anonymity, echoed Mr Field’s concerns by saying: “Is the lifeboat really intended for managements like JP who follow the wrong strategy for decades, slicing up the business while paying themselves vast salaries, and then dumping the pension liabilities in order to keep control through bondholders while pleading that they have at least saved the jobs?”

During an hour-long debate in the Commons, raised via an Urgent Question, MPs from all parties expressed concern at the potential impact of JP’s change of ownership on pensions and the long term viability of the local press in general.

Jeremy Wright, the Culture, Media and Sport Secretary, was forced to defend his claim that no current JP pensioners will be affected and that “anyone in receipt of their pension now will continue to be paid. The changes will affect those currently employed, 250 in total.”

Shadow media secretary Tom Watson said he had received information during the debate from the NUJ that some pensioners would be affected. He said: “If current pensioners will receive a shortfall will he come back to the House and put the matter right?”


Mr Wright said he would check what he said was correct.

The exchange came after Mr Wright implied that the government could demand further scrutiny of the deal and how it was handled as Mr Watson noted that JPI Media had been set up in September, a month before Johnston Press was put up for sale.

“Was the Secretary of State aware of this?” he asked. “The writing was on the wall for Johnston Press when the new entity was established.”

Mr Wright, added his support to the general view that the local press was vital to democracy, and sympathised with those who demanded that the tech giants – Facebook and Google – should shoulder the blame for much of the damage caused to the local media.

He noted that “we must all accept, as the local press accepts, that increasingly people are consuming their news online”, adding that companies like Facebook and Google had taken some action to offer support.

“We shall expect them to do more, particularly in the way online advertising is working. We need to look carefully at this… it is undoubtedly part of the structural answer.”

Comment: A story of management failure + what happens next?