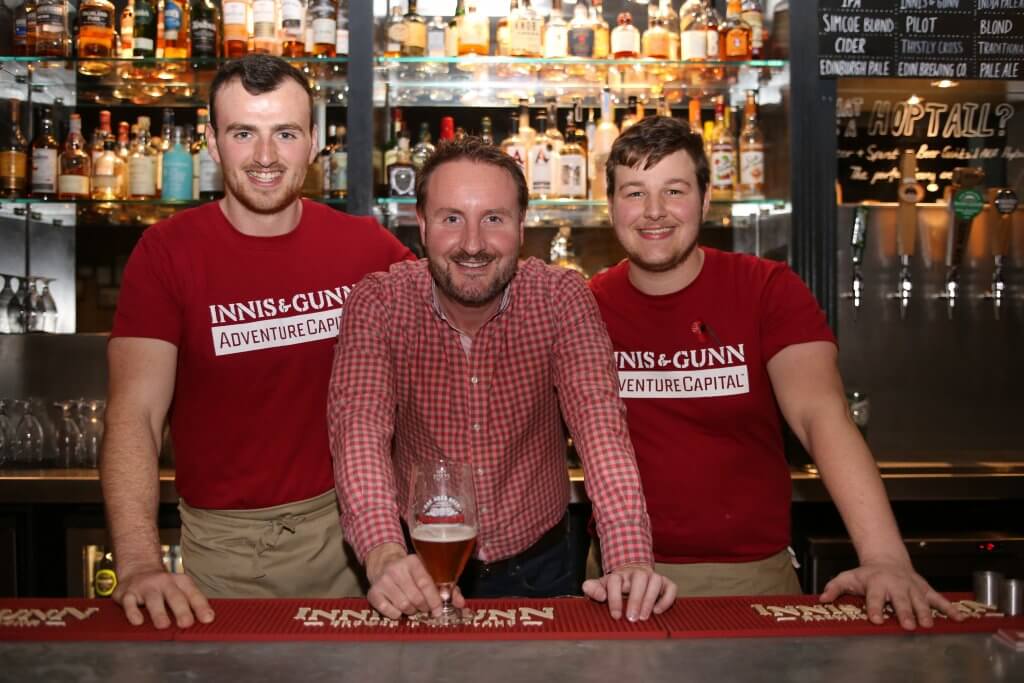 Dougal Sharp (centre): ‘It feels like we have come home’ (pic: Terry Murden)

Brewing group Innis & Gunn is to build a brewery in Edinburgh, revisiting a pledge it made to ‘bring the beers home’ almost four years ago.

The company’s plans were announced after it was confirmed yesterday that Tennent’s would stop brewing Innis & Gunn beers at its Wellpark Brewery in Glasgow from 2020.

Innis & Gunn beers were produced at the Caledonian Brewery in Slateford, Edinburgh, until Heineken acquired it as part of the takeover of Scottish & Newcastle.

Production was moved in 2011 to Wellpark because of capacity constraints at Belhaven in Dunbar and Marston’s down south where it is also produced.

In 2015 founder and master brewer Dougal Sharp revealed to Daily Business  that he planned a new brewery in Edinburgh to bring production back its roots following a fund-raising exercise.

However, a year later the company chose instead to acquire the Perth-based Inveralmond Brewery. It said today that the brewery will continue to brew its range of cask and bottled ales.

The new craft lager brewery, at an unspecified site, would have a capacity of up to 400,000 hectolitres – equivalent to 70 million pints. It will create up to 30 jobs.

Announcing the company’s plans at the company’s AGM in Glasgow, Mr Sharp, said: “Building a new brewery will cement our Edinburgh heritage as well as creating a focal point for our beers in the capital.

“It provides the brewing, packaging and warehousing capacity we need as we continue to strive to meet the surging demand for our lager, which is on track to be the No.1 craft lager in the UK, IPAs and barrel aged beers at home and around the world.

“For me putting the brewery in Edinburgh, where we first brewed Innis & Gunn, feels like we have come home as a business.”

Sales of its lager in the UK and overseas had doubled in size in the last two years, contributing to the brewer’s 14th successive year of double digit volume growth in 2017.

Aberdeenshire-based BrewDog continues its mission to take the craft beer revolution global with the launch of BrewDog Budapest.

Located at the heart of Hungary’s capital near the eclectic Godzu, the bar will the company’s 76th worldwide and will have the largest selection of craft beer in one location in the city.