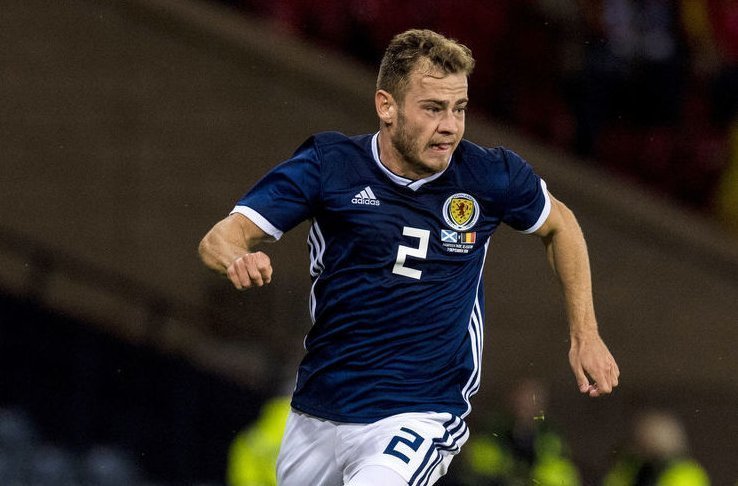 Ryan Fraser set Scotland on the way to an impressive victory with his first goal for his country (pic: SNS Group)

Scotland are just 90 minutes away from securing a play-off spot for Euro 2020 after cruising past 10-man Albania.

Following the thumping win in Shkoder, victory over Israel at Hampden Park on Tuesday night will see Alex McLeish’s side win Group C1.

The Scots will then be just two games away from booking a place in the finals, which will be staged in 12 cities throughout Europe.

McLeish’s side made light of the nine call-offs which had decimated his original squad, the new-look team producing what their manager labelled as an ‘exceptional performance’.

Ryan Fraser scored his first goal for his country when he opened the scoring early in the first half, while James Forrest also broke his international duck with a second-half brace. Steven Fletcher was the other scorer, converting a penalty on the stroke of half-time to net his first goal for Scotland since September 2016.

The Scots were helped by the hosts’ indiscipline, Mergim Mavraj seeing red after a head-butt on Ryan Christie with the score at 1-0.

The visitors punished their opponents in some style with the best display of McLeish’s tenure, Callum McGregor one of the real success stories with his dominant midfield performance.

“Ryan Fraser has been playing very high level at Bournemouth since the start of the season, but we’ve not been able to get him in the team for the qualification games,” McLeish said.

“Tonight, we got Ryan in and you see what he’s been doing the whole season.

“James has continued his great form. In the second half, he was fantastic.

“We knew watching the game that Steven Fletcher has been managing his body for the last few months having been out for a few months and he was a greater leader of the line for us tonight.

“We have set ourselves up, and Israel have set themselves up, so it should be a good game.

“We’ve got them on home soil. Let’s hope there is a great response from the Tartan Army and we’d love to see them come and cheer the guys to victory.

“If we play at that level, we have a good chance.”