Passengers to pay for new road 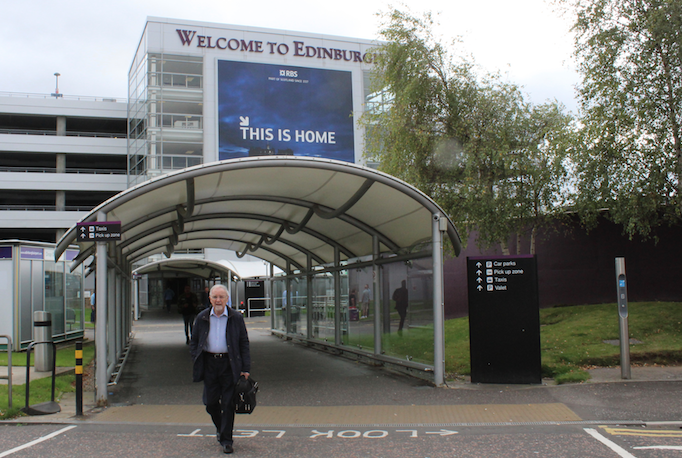 Some find the airport less than welcoming when they are stuck in queues (pic: Terry Murden)

From 8 November the charge for waiting up to five minutes goes up from £1 to £2, while those waiting between five and ten minutes face a £4 charge, and £10 for up to 15 minutes.

The airport says it expects the charge to cut the number of cars by 480,000 next year alone, though it also expects to raise more money which will be used to fund a new access road.

Research from the airport shows Eastfield Road is already operating at capacity with forecasters estimating that by the summer peak next year, the road will be at 121% capacity.

During the peak period in the summer of 2017 and 2018 the road saw traffic levels per lane outstrip the busiest days of the Forth Road Bridge in July 2017.

This summer passengers experienced significant congestion on the road network around airport, especially on departure. Every Monday, Thursday, Friday and Sunday between 2pm and 6pm in July and August, passengers faced 5-10-minute delays, often queueing into car parks

Edinburgh Airport analysis shows car using the drop off account for 20% of passengers but generates 33% of the traffic to the airport. Drop off users drop off, leave, pick up, leave, thereby generating far more road trips than other users.

Independent research also shows Edinburgh’s current 33p-per-minute rate for a 15-minute drop off is a pound higher than Glasgow Airport, more than twice as expensive as Aberdeen and over three times higher than Prestwick.

Airport chief executive, Gordon Dewar, said: “We’re committed to giving passengers the very best travel experience and this includes their access to and from the airport.

“Our proposals for a new access road which we anticipate funding the majority of will go a long way towards easing the current congestion problems our passengers face, and the consequent environmental impact.

“I appreciate the increase will not be welcome news for all but I’m sure most will realise the need for action to combat the congestion we currently experience not only in the summer but throughout the year.

“We are committed to working with the council and other partners to ensure that existing and new infrastructure is fit for purpose and will continue to make informed decisions to alleviate congestion now and in the coming months leading up to the peak summer period.”

Lothian’s commercial director, Nigel Serafini said: “As Edinburgh Airport expands and customer demand on our Airport Services grow, we will continue to work in close collaboration with the airport to ensure our services offer direct, reliable, value for money, convenient airport connections.

“Our partnership and expansion in service provides easily accessible citywide vital transport links to and from the airport. Feedback from customers has been extremely positive and we look forward to working with the airport on developments which further enhance the experience for our customers.”