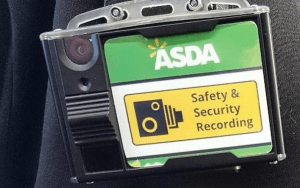 Scottish security firm Edesix is helping Asda improve the safety of its staff and achieve more convictions for theft and violence.

After a successful trial of its body worn cameras, which began in 2016, there are now over 900 in operation in more than 250 supermarkets across the UK.

This system, which is intuitive to use and requires minimum training, has enabled staff to integrate the cameras into their daily working processes with minimal fuss.

Asda has been able to improve colleague security, diffuse aggressive and volatile situations and reduce valued investigation time, thus reducing costs. It has secured numerous convictions relating to theft and violence against staff.

Richie McBride, managing director of Edesix, said: “Asda, along with CBES, identified the need to re-think its key security policy around challenging aggressive behaviour towards staff.

McBride adds: “The body worn cameras act as a confrontation preventer, as it is proven that members of the public are far less aggressive to staff members if they know they are being filmed.”

Edesix, which was acquired recently by US-based security specialists Vigilant Solutions, has won major contracts with the likes of UK prisons, ScotRail and South Australian Police.

Linkedin
Asda and violence against staff, body worn cameras, Edesix News, Deals & Enterprise, Scotland No Comments » Print this News
Delivering Brexit for the people ‘is within our grasp’ says May Previous News
Next News E-cigarette firm Vaporized invests in manufacturing