Another year of growth 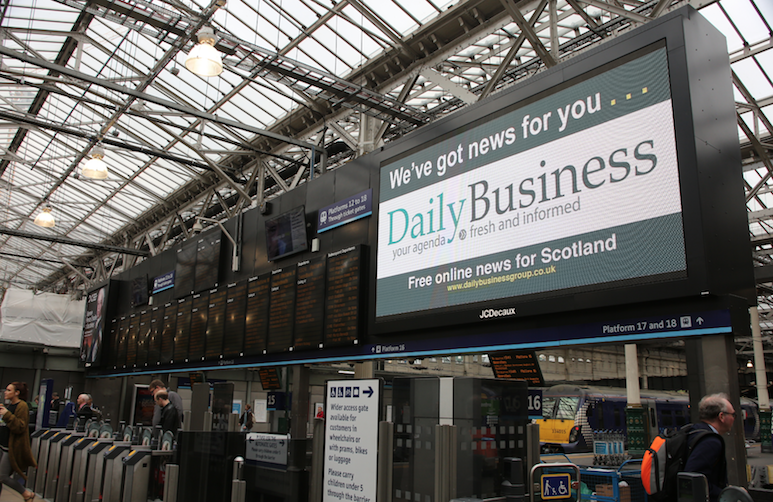 Daily Business is marking its fourth anniversary this week amid talks with a UK-wide provider of news services to further expand the title’s presence in the digital media market.

Another year of rising revenue and consolidation has drawn interest from a London-based organisation wanting to supply services to Daily Business in recognition of its growing influence with key decision makers and influencers. Further information will be provided in due course.

Daily Business Group, operating from offices in Edinburgh’s west end, is emerging as an integrated communications company which includes the Daily Business news and Daily Business Magazine websites as well as DB Media Services which handles the commercial and third party activities of the group. These include communications, photography, video, copywriting and media training, supplied via partnerships with organisations such as PK Media & PR, SNS Group, and Edinburgh Elite Media.

A new website for DB Media Services was launched this summer and forms a key plank in providing a modern communications package that blends the needs of readers and clients. Over the past year we have worked with several large and small organisations, including blue chip corporates, charities and arts performers, who value the range of options on offer and a guaranteed link to the news website.

In the meantime, Daily Business has been building its team of reporters and writers across a wider spectrum of interests. Paul Kiddie, news and sports correspondent, was joined for the Budget by former Scotsman City Editor Martin Flanagan. Commentator Brian Monteith writes a column on politics and economics every Friday, while Alan Steel contributes a regular and entertaining view on the investment world. Andy Moseley joined as arts correspondent during the Edinburgh Fringe, to supply Daily Business Magazine with reviews, and is focusing on topical issues in the arts world.

Since I launched Daily Business with IT consultant and web designer Jeremy Davis in November 2014 we have grown turnover and profits each year and continue to attract the attention of backers who want to support the project and protect Scottish journalism. This is at a time when one group of Scottish titles, The Scotsman, Scotland on Sunday and the Edinburgh Evening News, faces a less certain future as a result of owner Johnston Press putting itself up for sale. Being a finalist in the Financial Journalist of the Year Awards sponsored by Headline Money was an endorsement of our progress.

Growth has been maintained, though frustrated, by a number of external forces. BBC Scotland has continued to resist our appeals for it to recognise the existence of the digital media and instead continues to promote a select number of printed titles (even ignoring their digital offerings).

We have put our case for the BBC to fulfil its commitment to ‘fairness and inclusivity’ to the corporation’s management at Pacific Quay and to Ofcom Scotland, the regulator, which offered a sympathetic hearing.

Ofcom is now “carrying out a review of the BBC’s news and current affairs output, and how it is adapting to the changing news environment.”

Ofcom Scotland informed Daily Business last month that it would “ensure your previous correspondence is shared with the project team”.

Daily Business, like other commercial media, faces the pressures of a shrinking advertising market and is therefore doubly disappointed at BBC Scotland’s continued and outdated policy of offering free daily exposure to the print versions of a limited range of media titles. BBC Radio Four has recognised the need to make this change and now acknowledges news websites in its regular review of the news media.

There is also, surely, a requirement for editors across the industry to monitor their own organisations’ willingness to allow advertising and promotion to be passed off as news. With traditional display advertising in decline, it is imperative that all online publishers do not allow commercial organisations to use other devices, such as free links inserted into editorial copy as a way of diverting readers to their own websites. These are valuable sources of revenue and must be protected. Unlike some media Daily Business insists, for both editorial and commercial reasons, on charging for promotional material, including awards and, in general, the launch of new products and services.

A number of PR agencies have also acknowledged the growing need to pay for some services in a changing media environment.

A final thank you goes to those individuals who have generously made one-off donations to support Daily Business and independent Scottish journalism. One-off donations can be made here for as little as £20.

If you are interested in working with Daily Business to help build our commercial activities through advertising, sponsorship and corporate partnerships please get in touch: