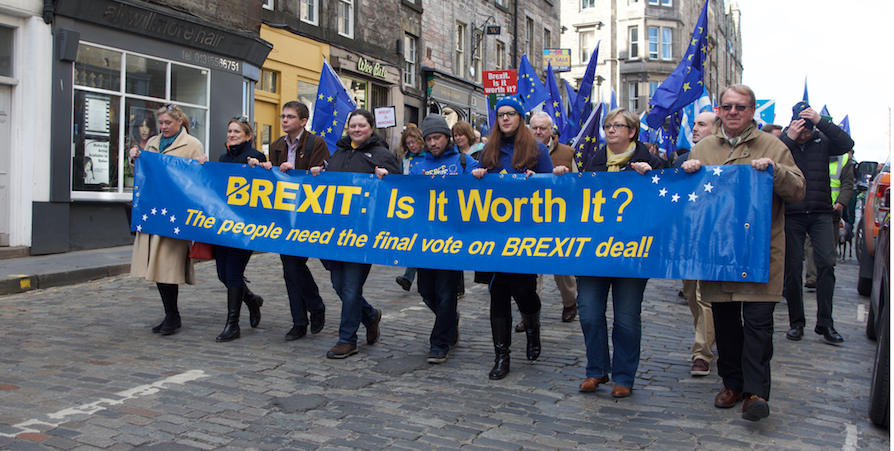 Calls for a second vote are growing (pic: Terry Murden)

More than 70 business figures have signed a letter supporting calls for a public vote on the final terms of Britain’s exit from the European Union.

The letter expresses growing concern over the prospect of Britain leaving the world’s biggest trading bloc in March without an agreement.

It further states alarm that Britain may sign up to a a deal that limits companies’ access to the continent’s markets.

The group includes Justin King, the former chief executive of Sainsbury’s, and the heads of other blue chip companies including BT and Unipart.

They have formed a  new group called “Business for a People’s Vote”, to put pressure on politicians for a vote.

While Downing Street hints at a deal with Brussels being close there is increasing anxiety among business leaders about the lack of substance.

The letter, sent to The Sunday Times, states: “We are now facing either a blindfold or a destructive hard Brexit. Both these options will further depress investment.

“They will be bad for business and bad for working people. Given that neither was on the ballot in 2016, we believe the ultimate choice should be handed back to the public with a People’s Vote.”

The government, however, appears to be resisting calls to give the public a further say on any Brexit deal with a department spokesman saying it was confident of securing a deal that works for businesses.

“The people of the United Kingdom have already had their say in one of the biggest democratic exercises this country has ever seen and the prime minister has made it clear that there is not going to be a second referendum,” said the spokesman.

Signatories to the letter are understood to include James Daunt, the Waterstones’ chief executive; Baroness Lane-Fox, the co-founder of Lastminute.com; Sir Mike Rake, former chairman of BT Group; and Richard Reed, co-founder of Innocent Drinks.

Sir Vince Cable, who visited the Edinburgh offices of Diageo on Friday, said there were a lot of “smoke and mirrors” around the messages emanating from the government and that “no one knows what is going on”.

Sir Vince recently joined a cross-party group of MPs in Brussels to inform EU negotiator Michel Barnier about the campaign for a People’s Vote.