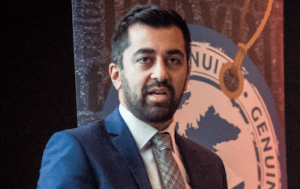 Mr Yousaf says many firms are failing to meet their duty to publish an annual statement outlining steps they have taken in their business and supply chain.

Speaking at an Anti-Slavery Day conference hosted by the Scottish Government and COSLA, Mr Yousaf said: “Human trafficking and exploitation prey on the most vulnerable in society. Often hidden in plain sight and in legitimate businesses, these offences are on the increase worldwide.

“Since our Trafficking and Exploitation Strategy was published in 2017 we have made significant progress but businesses need to understand the risks and tackle the conditions that foster these crimes.”

Mr Yousaf said investors are increasingly focusing on human trafficking as a business risk, making it an issue that boards “simply cannot afford to ignore”.

He said: “Our biggest firms must lead by example, ensuring they are not complicit in these horrendous crimes, and that is why I am writing to companies to demand urgent action.”

Guidance has been developed with advice from the Corporate Group established to support implementation of the Trafficking and Exploitation Strategy. Its members include HSBC, The Co-op, Multiplex Construction, SSE and the Scottish Trades Union Congress (STUC).

Alison McGregor, CEO of HSBC Scotland, said: “Every business plays a critical role in supporting the eradication of Human Trafficking and helping those that have been affected by it and HSBC is proud to play its part.  This guidance is an important new tool for all.”

Human trafficking impacts all types of businesses and the guidance recommends that checks should be undertaken to ensure workers have access to identification documents, are not being held in debt bondage and are not being coerced.

Employees should be given training to spot signs of exploitation and encouraged to report concerns to Police Scotland or the UK Modern Slavery helpline.

Under the Modern Slavery Act 2015 companies with a turnover of at least £36 million are legally required to publish an annual Slavery and Human Trafficking Statement, clearly linked from the homepage of their website.

However, research undertaken by the Scottish Government shows that a significant minority of businesses do not appear to have published statements.