We may have to get used to having No Deal

We are now approaching what appears to be the denouement of the UK government’s decision on what type of Brexit it intends to deliver. That Theresa May is still haggling with her own Cabinet (mainly by keeping its members entirely in the dark) says everything about the shambles of her negotiating strategy since she lost her unnecessary general election last year.

Let us recap. Theresa May became Conservative leader and Prime Minister by default as one candidate after another withdrew. She won growing popular support by appearing to be a remain campaigner who accepted the democratic vote and wished to pull everyone together by delivering the best possible EU withdrawal (“Brexit means Brexit”).

Her Lancaster House and Florence speeches were a positive, co-operative, global and international vision of Brexit. The UK would be outside the Single Market and Customs Union but, as with the US or China, it would have the same access to trade. The negotiations would seek to secure any preferential trade agreements, like those enjoyed by South Korea or Canada.

Then she lost her election and over time conceded the negotiating agenda, the need for a withdrawal agreement and finally by last December gave the EU the last say on how the border between the UK and the Republic of Ireland would be administered – the Irish border “backstop”.

Further UK concessions have followed, while nothing of note has been given up by the EU. It knows Mrs May has put achieving any deal as being her benchmark of success, despite saying (clearly only for effect) that “no deal is better than a bad deal”.

Having then concocted an unworkable “Chequers” proposal that is no longer acceptable to her own cabinet, her own party, the parliament – and according to polling, the people too – she needs to find a new solution to her inability to secure a trading agreement. The alternative is trading on WTO terms – the No Deal she was willing to accept nearly two years ago.

Having agreed, without any need to, that there is a problem with administering the Irish border (even though it already copes with different VAT, duties, taxes, currency, social welfare, animal welfare, migration etc.) the Prime Minister will attempt to solve the backstop next week. She is expected to recommend UK membership of the Customs Union on a temporary – but unlimited – time span. 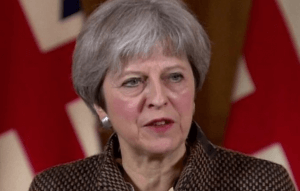 Few MPs now trust the EU or Theresa May enough to believe the UK will ever leave, while Chequers means the UK will already be accepting the EU’s common rule book for goods and most foods, meaning a de facto membership of the Single Market too.

So we will be inside the Customs Union and Single Market, after all. Meanwhile, the UK’s defence, security and intelligence service co-operation has already been conceded (cheaply) as has payment of a leaving fee of £39bn. There appears nothing much left to concede before “Brexit means Membership” – but without a say.

Nobody, be it a leaver or remainer, campaigned for this. It will be the worst of all Brexits, delivered by what I have to say is the worst of all prime ministers I can recall in my sixty years on this earth. The outcry from those that voted for either answer to the referendum question will be loud – and destabilising for our now febrile democracy.

There is only one group of people who appear willing and able to halt this. It is not the Tory mainstream backbenchers (which includes past remainer ministers like Greg hands), whom May has turned into rebels – but the DUP. The reason for this is the DUP views the issue as not about trade agreements or economics, but about something far more important – maintaining the Union.

If any deal is brought forward by the Prime Minister that means Northern Ireland is treated differently the DUP MPs will reject it. They will not accept a deal whereby Great Britain – England, Scotland and Wales – is able to have trade deals with the US or China, but Northern Ireland is locked out because it has become a de facto province of the EU. The six counties of Ulster will be an adjunct to the Republic of Ireland without consent, counter to what the Belfast Agreement promised.

In future, many laws made in Westminster would no longer apply in Northern Ireland – while many EU laws the Republic has a vote on, but citizens of Northern Ireland could not, would apply. This transference of authority is a serious constitutional issue that lives have in the past been lost for. That’s why Arlene Foster said her red lines were “blood red”.

Theresa may ignores this at her political peril. When the DUP leadership says its MPs will vote against the government’s budget I believe them. On Wednesday night they abstained on an otherwise unimportant vote. When it was said the border issue was about who blinked first the DUP response was “fine, we’ve already cut off our eyelids”.

A border down the Irish Sea is completely unacceptable to the DUP. If Northern Ireland cannot share the gain – or the pain – of being part of the UK outside the EU it will not vote for May’s compromises. It’s MPs will prefer No Deal.

Meanwhile, Scotland’s First minister has said any deal leaving Northern Ireland inside the Single Market and Customs Union should be given to Scotland too. Nicola Sturgeon entirely misses the point; such an arrangement is being considered only to avoid  a hard land border between Ireland and the UK, but to apply the same approach in Scotland would introduce  a hard land border between Scotland and England from Berwick to Carlisle.

We continue to move towards a No Deal scenario because no agreement can be found in Parliament for what is better than that most basic of outcomes. Trading with the EU without a deal is how the US and China conduct their relationships, we might just have to get used to it ourselves.

Linkedin
Brexit talks, Theresa May Columnists 2 Comments » Print this News
Par Equity and SIB back Censo’s stem cell research Previous News
Next News Back to drawing board as Scots humbled in Haifa