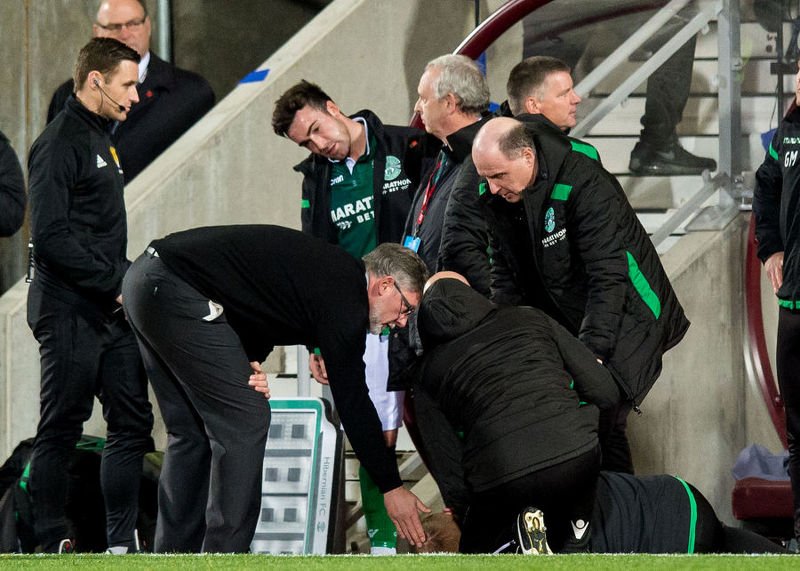 Hearts manager Craig Levein checks on Neil Lennon after the Hibs boss appeared to be struck by a missile from the main stand (pic: SNS Group)

The events at Tynecastle are the subject of probes by Police Scotland and the Scottish FA after Hibs boss Neil Lennon appeared to be struck by a coin and Hearts keeper Bobby Zlamal punched by a Hibs fan.

The Edinburgh derby finished goalless after a fraught affair in Gorgie, with the Hibees the happier team after finishing the game with 10 men after Florian Kamberi’s red card.

However, the game will be remembered for all the wrong reasons due to events off the pitch and both clubs will be in serious trouble thanks to the idiotic behaviour of their supporters.

There were 19,410 fans crammed into Tynecastle for the eagerly-anticipated clash but the actions of two will now come under the authorities’ spotlight.

Zlamal appeared to be struck by a Hibs fan as he retrieved the ball from behind his goal in the second half, while in the closing minutes Lennon was left clutching his face on the ground after what appeared to be a missile thrown by a Hearts fan hit his face.

“I’m alright. It was a £1 pound coin,” said Lennon, who was attacked by a Hearts fan at Tynecastle in 2011 while in charge of Celtic.

“I hope somebody deals with it and I can meet the guy face to face. 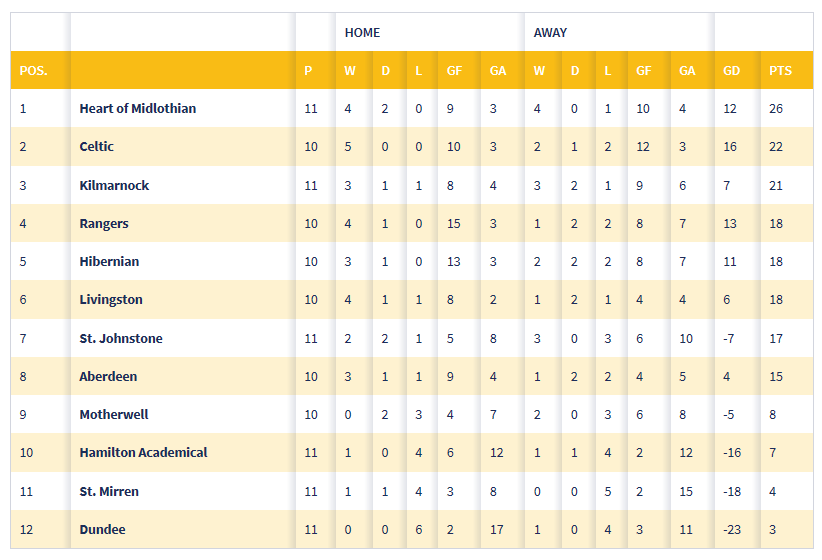 “It’s disgraceful. Players are out there trying to do their job, trying to entertain people. I don’t understand the mentality of the supporter who wants to throw things at people.

“I seen plenty of it over the weekend as well. It’s unsavoury and needs to be stopped.”

Asked about the incident involving Zlamal, he added: “If a Hibs fan has thrown anything at the goalkeeper then he should be punished, banned. We don’t condone that behaviour at all. It’s absolutely disgraceful.”

His opposite number Craig Levein was equally scathing in his criticism of the fans’ behaviour.

He said: “I’m incredibly disappointed those two things have happened on the outside of the match. I understand people’s tensions are high but I can’t condone any sort of behaviour like that. It’s terrible.

Both teams struck the woodwork in a keenly contested match and Hearts had a late goal ruled out for offside, just seconds before the incident involving Lennon.

Commenting on events on the field, Lennon said: “While I’m pleased with the point, I’m frustrated we didn’t take all three. We were the better team for long periods of the game and should have been at least a goal up by half-time.”

Hearts struggled to make any inroads into the Hibs defence, with Levein reflecting: “We had problems in the forward areas.

“Our fight and determination was evident throughout the match but we just didn’t provide enough quality in the last third to allow us to score and win the game.”

The draw allowed Celtic to cut Hearts’ lead at the top of the table to four points after the champions thrashed Dundee 5-0 at Dens Park. Kilmarnock fought back to earn a 1-1 draw at Ibrox, while Aberdeen followed up their League Cup semi-final win over the Gers with a 3-0 win over Hamilton at Pittodrie. Livingston dropped to fifth place after losing 1-0 at home to St Johnstone, while St Mirren’s woes continued with 2-0 defeat at home to Motherwell.