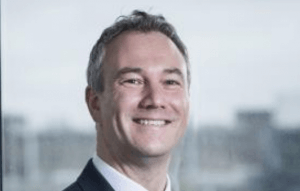 TLT, one of the few legal firms able to advise in each of the UK’s three legal jurisdictions, has accelerated its growth strategy in Scotland with the acquisition of Glasgow-based commercial real estate firm Leslie Wolfson & Co.

John Paul Sheridan (pictured), TLT’s head of Scotland, said:  “We are committed to growing the team in Scotland and building a market-leading service for clients in the sectors where we specialise, and this acquisition is a clear example of our drive to deliver that.

“Leslie Wolfson is a great fit with what we are trying to achieve in Scotland and across the UK. Their expertise will further enhance the support we can offer clients.”

Mr Beach said:  “The move enables us to more effectively support our existing clients by drawing on the expertise of a full-service UK firm with on-the-ground expertise in all three UK legal jurisdictions. With an emphasis on partner-led service, commerciality and sector experience, TLT was a natural fit for us.

“We are delighted to join TLT at such an exciting time in the firm’s growth and look forward to working with John Paul and the wider TLT team to develop the firm’s  client offering.”

This is the latest addition to TLT’s Scotland practice since disputes partner Mr Sheridan took over the leadership of the firm in Scotland in February 2018. Other 2018 hires include clean energy real estate partner Nick Shenken from Pinsent Masons and banking & finance partner Douglas Gourlay from Weightmans.

TLT launched in Scotland following the 2012 merger with Anderson Fyfe, providing it with the capability to deliver legal advice from all three UK legal jurisdictions – England and Wales, Northern Ireland and Scotland. It is one of only a handful of UK law firms that can deliver this support for clients.

The firm recently announced a 10% increase in UK fee income to hit £82m for the financial year 2017/18 – the first full financial year since the launch of its new strategy to 2020.

Founded in 1955, Leslie Wolfson is a Glasgow-based firm specialising in the commercial real estate sector. The firm was founded by the late Leslie Wolfson, a well-known human rights activist, philanthropist and prominent member of the Jewish community in Scotland.

He is arguably best known for his work navigating the Soviet legal system and the KGB during the 1970s to help relocate hundreds of people to the West. His family established the Alma and Leslie Wolfson Charitable Trust, which has donated substantial sums to causes such as Scottish Ballet and Glasgow School of Art.