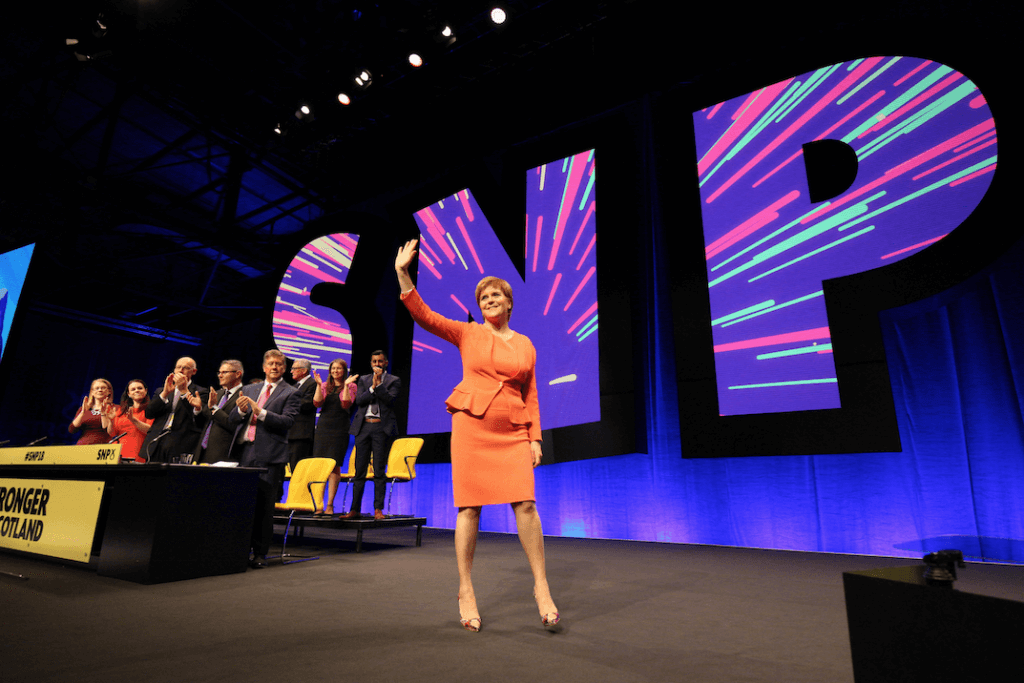 Nicola Sturgeon used her closing speech to urge SNP supporters to be patient in their quest for independence.

The party leader and First Minister nonetheless dwelt on the subject, devoting a large chunk of hour long address to the subject without committing to any date for a referendum.

She drew delegates’ attention to what she described as the “unfolding calamity” of the Tory government while offering an enticing prospect of an independent Scotland which was not so much a small country as a “big family”.

Pointing to the in-fighting among Westminster parties and the slow progress towards a Brexit deal, she said: “That is why it is up to us – now more than ever – to offer optimism and hope.

“That is the difference between our party and Westminster.”

She said: “Just think how much more hope will be possible when we take Scotland’s future into Scotland’s hands and become an independent country.

“An independent Scotland, just as Scotland is now, will be a beacon for progressive values – equality, opportunity, diversity and fairness.”

Contrasting her party’s values with the immigration policies of the Tories, she said: “In the face of rising prejudice and intolerance across the world, I am proud that our party welcomes those who come here from other countries.

“To everyone who has chosen to make Scotland your home, no matter where you come from, let me say this again today. We value your contribution. Ours is a better country for having you here and we want you to stay.

“And to the Prime Minister, my message is blunt. It is great that the son of an immigrant is your Home Secretary.

“But don’t expect praise when you are denying others the chance to build a life here. Actions, Prime Minister, speak louder than words. End your hostile environment policy and end it now.”

She confirmed that the SNP would support a second referendum on Brexit, but added a note of caution. 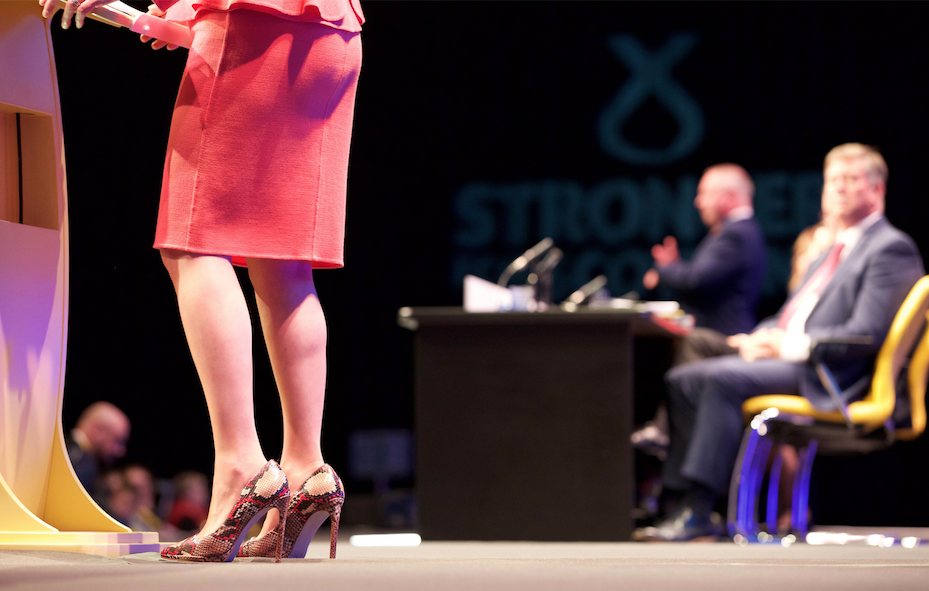 In a reference to Theresa May’s ‘dancing queen’ entrance to the Tory party conference, Nicola Sturgeon said: ‘Don’t expect me to dance – not in these shoes’ (pic: Terry Murden)

“In recent days, we have argued for the Article 50 process to be extended to allow disaster to be averted,” she said. “That would allow more time for a sensible single market option to be pursued. And it would allow time for another vote to take place. On that, let me make our position clear. If there is a proposal for another EU referendum, SNP MPs will vote for it.

“But let’s not kid ourselves. There is no guarantee that another vote won’t deliver the same outcome.”

Making a deliberate link between Brexit and independence, she said:  “Brexit is a serious problem for Scotland.

“But that is only because of a more fundamental issue. Our future is not in our own hands. Scotland’s future is in Westminster’s hands. And the only solution to that is to become an independent country.”

Accepting that hearts and minds still had to be won over, she said: “To those who say there is no demand for Scotland to have a choice over our future, I say the polls and the people are telling a different story.

“Our job is to take that passion and blend it with pragmatism, perseverance and patience to persuade those not yet persuaded.

“If we do that, then believe me – the momentum for independence will be unstoppable.

“As we wait – impatiently, at times, I know – for this phase of negotiations to conclude and for the fog of Brexit to clear, be in no doubt about this. 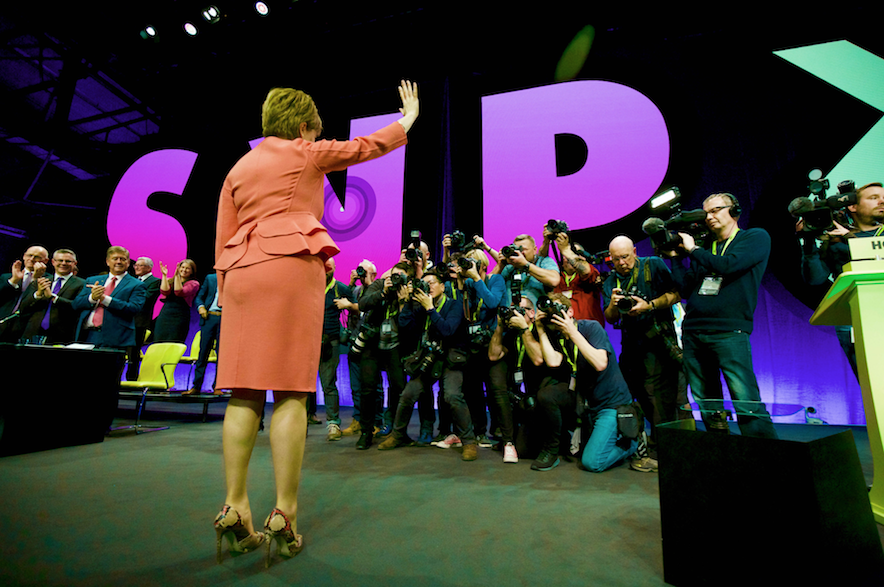 Facing the cameras: the SNP leader in the spotlight (pic: Terry Murden)

“Our task now is to step up our work to update and strengthen the case. The Sustainable Growth Commission set out the opportunities that are there to be grasped in an independent Scotland.

“We must show people that with the powers of independence we can fully realise our country’s vast potential.

“But never, ever, let anyone tell us that Scotland doesn’t have the talent and resources to be a successful independent country. The economic potential of our nation is enormous.”

Ms Sturgeon said Theresa May had made a big deal about lifting the borrowing cap on local councils.

“The SNP has never applied a cap in Scotland,” she said. “Which maybe goes some of the way to explaining this quite remarkable fact.

“Over the last five years, more council houses have been built in Scotland than south of the border. Not proportionately. In absolute terms. We’ve built more council houses than a country ten times our size. Overall, we’ve delivered 78,000 new affordable homes in our time in government. And I can confirm today that we are on track to reach our 50,000 target in this term of parliament.”

She announced that in the fight to combat homelessness, the government has joined forces with the Social Bite charity and will increase its investment to £6.5 million to help 800 people out of homelessness for good.

Aside from criticising the Tories and Brexit, she accused Jeremy Corbyn and Labour of delivering an “SNP policy tribute act” during its own party conference.

“So here’s an offer, Jeremy. You say you want to bring water into public ownership.  The next time you’re in Scotland, I’ll show you how to run a public water company.