Scotsman owner Johnston Press puts itself up for sale 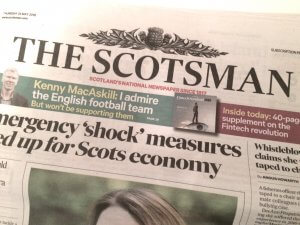 Johnston Press, owner of The Scotsman newspaper, has put itself up for sale as it seeks a way to settle its long-standing debt.

The decision to seek offers for the 178-title group follows a strategic review of financing options first announced in March 2017.

The company has focussed on exploring all options available to it in relation to its £220 million outstanding 8.625% senior secured notes due for repayment on 1 June next year.

It said it is not in discussions with any potential buyers or in receipt of any approaches.

The sale is being handled by Rothschild and said there can be no certainty that any offer will be made for the company. There has been talk of administration as a possible outcome.

The group, which employs 2,000 staff, has struggled with declining revenues from print and in recent years has been propped up by the success of the ‘i’ newspaper which it acquired in 2016 from Evgeny Lebedev, owner of ESI Media which publishes The Independent online.

However, performance and recovery at group level has been held back by punishing repayments on the debt it accumulated during an acquisition spree led by former CEO Tim Bowdler. The company paid £160m to acquire the The Scotsman Publications.

Investors have seen the shares slump to ‘penny’ status with the whole group now worth just £3.44m at last night’s close.

Last year it was approached by Custos Group, the investment vehicle of Norwegian investor Christen Ager-Hanssen who accumulated a holding in the company and demanded a change in the boardroom. It is understood that he acquired some of his shares from Crystal Amber.

The group includes a number of heavyweight local titles including the Yorkshire Post and Sheffield Star, but its dependence on the local newspaper market at a time when readers are switching from print to online news sources has seriously impacted on revenues.

A strong performance by the ‘i’ helped it turn in a pre-tax profit for the half year to the end of June 2018 of £6.2m against a loss before tax of £10.2m last time. There was an operating profit of £7.4m compared to £4.9m in the same period last year.

However, adjusted advertising revenues from continuing operations were down 15% with revenue from classified advertising falling 28.5% compared to the same period last year. Total revenue was £93m (H1 2017: £103.3m) down 10%.

Chief executive David King, who replaced Ashley Highfield earlier in the summer, said the group was facing two key issues: its historical debts, including its pension obligations, and the tough market conditions affecting the performance of its newspapers and websites.