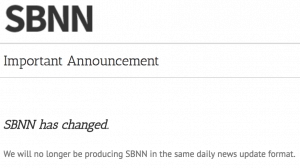 A Scottish news website is phasing out its national business coverage after struggling to make it commercially viable.

Scottish Business News Network is reverting to its earlier operation as Aberdeen Business News and will be introducing niche websites such as highgrowth.scot and BrewedandDistilled.co.uk

Mike Watson, who runs SBNN, said the plan is to move away from news to producing more magazine-style content.

He said traffic has stagnated and that there were not enough commercial opportunities to justify the time and expense of continuing with a national edition.

The decision follows the closure of BQ magazine earlier this year.

SBNN’s demise comes as Daily Business prepares to announce a sponsor for this year’s Budget and has received a four-figure contribution from a regular reader.

The website remains free-to-access but welcomes donations from readers for as little as £20 to help finance the service.

Terry Murden, editor of Daily Business, said:  “I wish Mike well in his future plans and hope this reminds readers that the financial model for supporting journalism is changing.

“More than ever it is important to maintain editorial integrity, stop passing off PR-led advertising as news and seek out new models for monetising the service.”