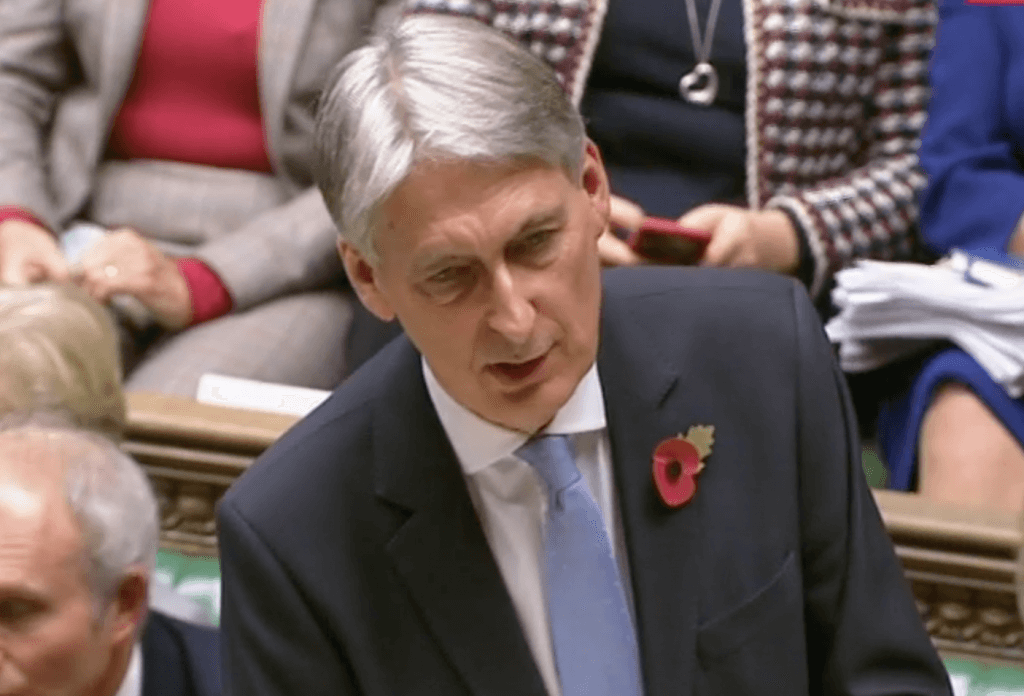 Mr Hammond said promises to raise income tax thresholds would be introduced from next April, a year earlier than its manifesto pledge and in defiance of those who were prepared to sacrifice the tax cut to meet a £20bn bill for the NHS.

In a move clearly directed at firms such as Amazon and Facebook, Mr Hammond said a new UK Digital Services Tax would ensure the big tech firms “pay their share towards supporting our public services”.

He said  the government would scrap PFI contracts for future contracts “putting another legacy of Labour behind us”.

A new tax will be introduced on the manufacturers and importers of plastic packaging to tackle the scourge of waste, but he will take further advice before imposing a tax on disposable cups.

He unveiled a package of measures to support investment, including £200m for the British Business Bank and raising the annual business investment allowance from £200,000 to £1m for two years.

He said he was confident the government will achieve a Brexit deal that will secure a financial dividend for Britain.

He declared “the era of austerity is finally coming to an end”, qualifying the Prime Minister’s claim that it was already at an end, as he outlined a Budget for the “strivers, grafter and carers” his party was “proud to support”. The proportion of low paid jobs is at its lowest since 1997.

“The tough decisions of the past eight years were not driven by ideology,” he said, “they were driven by necessity and the failure of the party opposite.”

Public spending is coming in substantially below forecast, he said, announcing that public investment will grow to its highest in 40 years.

Mr Hammond announced a new 10-year plan for the NHS which will include mental health crisis service with facilities in every A&E in the country.

He confirmed an additional £1 billion for the Ministry of Defence. “We are proud of our armed forces and we will always back them to keep our country safe”, he said.

Mr Hammond said the government would mark the centenary of the armistice with £10m from VAT receipts to support mentally ill veterans.

John McDonnell, Labour’s Shadow Chancellor, said: “We now have it confirmed that the pledge to end austerity was a broken promise, like the whole budget.

“It is now clear austerity is not over, the cuts to social security will continue and Philip Hammond gave no assurances that departments won’t face further cuts.

“Eight years of destructive austerity has damaged our economy, damaged people’s incomes and damaged our essential services. There is nothing in today’s budget to repair the damage to schools, the police and local councils.

“The money promised for Universal Credit is less than a third of the £7bn of social security cuts still to come and today’s announcement on work allowances reverses just over half the cuts made in 2015.

“While hitting those most vulnerable in our society, the Tories will have handed out £110bn in corporate tax giveaways by the end of this Parliament.”