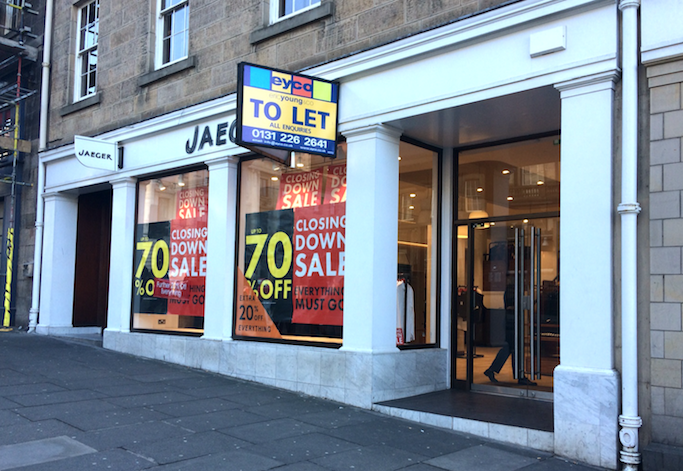 Will Scotland copy the Chancellor’s help for the high street? (pic: Terry Murden)

Scottish Finance Secretary Derek Mackay was handed a £1 billion pot for public services in Scotland as extra spending announced by the Chancellor cascades into the regional governments.

Mr Mackay will be challenged to meet Mr Hammond’s decision to raise income tax thresholds a year earlier than planned. The Scottish government did not pass on the full increase for higher rate payers last year.

The Scottish minister said at the weekend that he will be assessing whether to cut business rates in line with the Chancellor’s announcement of a one-third cut for small retailers.

Scottish Secretary David Mundell hailed the Budget as “great news for people in Scotland” but Mr Mackay said the UK Government’s budget “failed to deliver an end to austerity”.

He said it does not deliver on the promises of a significant uplift in public spending, as Scotland’s resource block grant remains almost £2 billion lower in real terms in 2019/20, than it was in 2010/11.

“There was little in this budget to boost our public services. The Scottish Government has already set out our plans to support the NHS in the years to come and the funding we have received as a result of health spending in England will go to our NHS in Scotland – but so far the UK Government has fallen at least £50m short of what was promised only 4 months ago.

“The reality of today’s budget is that Scotland continues to be hit by UK austerity and the decision to leave the EU.

“I have consistently argued for a better settlement for Scotland, and this budget does not reflect that.”

“The Chancellor’s decisions mean there will be an extra £1 billion to invest in public services in Scotland.  I urge the Scottish Government to use this extra money to support the NHS in Scotland, fix the roads, boost Scotland’s economy and reinvigorate Scotland’s high streets.

“The freeze on spirits duty will be a boost to Scotland’s whisky industry, maintaining the favourable tax climate for oil and gas will continue to help support the recovery of the sector, investing in fisheries technology will help support a key Scottish industry, and freezing beer duty will support large and small brewers across Scotland.

“I welcome the significant investment – £150 million – in the Tay Cities Deal.  The Deal will drive economic growth in Tayside, boosting jobs and prosperity throughout the region.   I also welcome the announcement that we are to open negotiations on a Moray Growth Deal, and we continue to make progress on Growth Deals for  Borderlands and Ayrshire.

“In all, the UK Government is investing more than £1 billion in City Region Deals right across Scotland, helping to drive growth in Scotland’s economy.

“On top of our extensive investment in Scotland’s economy, individuals up and down Scotland will benefit from the ongoing freeze on fuel duty and the increase in personal allowance. Today’s Budget demonstrates clearly how the UK Government is delivering for people in Scotland.”