Let’s stick together says dancing May in austerity pledge 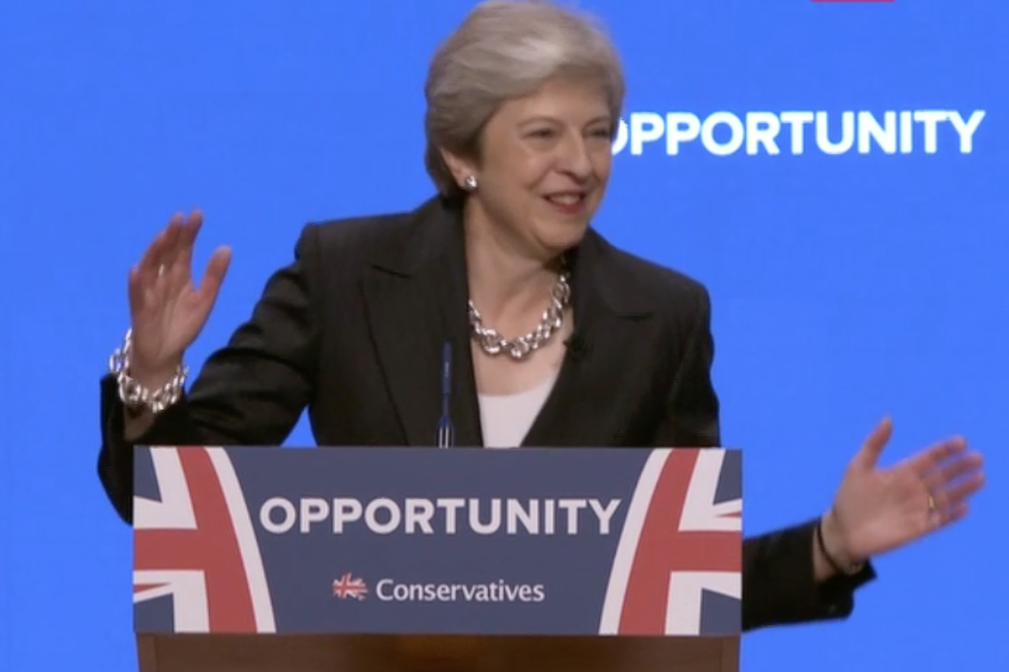 Dance with me: Theresa May danced on to the stage and cracked jokes

Theresa May today threw down a challenge to opponents of her Brexit plans by urging her party to “stick together and hold our nerve”.

Without specifically referring to her much-criticised Chequers plan, she did not rule out a “No Deal” option and instead put her faith in Britain’s innovators and public service workers to “build a better Britain” and signalled an end to austerity.

“No one wants a good deal more than me, but that does not mean a deal at any cost,” she told her annual conference in Birmingham. “People put their faith in us to deliver. I will not let them down.”

The government must honour the result of the 2016 referendum, she said, calling it the “People’s Vote” and ruling out the prospect of a second referendum.

But the UK must also maintain a good relationship with the EU.

“I am asked to rule out No Deal but that would weaken our negotiating position,” she said.

Britain isn’t afraid to leave with no deal if it has to, she said. Tariffs would be imposed. It would be difficult at first, although eventually the UK would prosper, she said.

Two choices had been offered by the EU, neither of which were acceptable.

She said Nicola Sturgeon wants to lock Scotland into the common fisheries policy. “That’s not stronger for Scotland, it is a betrayal of Scotland,” said Mrs May.

She promised that next year would see the austerity programme wound down as the issues caused by the financial crash a decade ago were resolved.

In a dig at Labour’s slogan, she said her party was not for the many, or the few, “but for everyone”.

In an attack on abusive comments on social media, she said it was deterring some from standing for office and it was targeted at all parties.

She called for “cutting through the bile” and mentioned the attacks on Jacob Rees-Mogg’s family and the  racist and mysogynistic attacks on the Labour MP Diane Abbott, saying she had suffered more abuse than when she first stood 30 years ago.

“You don’t have to believe in what Diane Abbott says, but she has the right to say it free from threats and abuse,” said the Prime Minister.

Mrs May attempted to set an upbeat, leader-friendly tone by dancing on to the  stage and cracking jokes about her coughing fit at last year’s conference.

Outlining the theme of opportunity, she referred to top Tory achievers, saying someone who had been in care could become a member of the Cabinet, a grandchild of the Windrush generation could become mayor of London and, referring to Scottish Conservative leader Ruth Davidson, she said: “If you are pregnant with your first child and engaged to your girlfriend you can be the next First Minister of Scotland.”

Dr Adam Marshall, director general of the British Chambers of Commerce, said: “Business communities across the country have been dismayed by the tone of politics in recent months, and the sidelining of their very real concerns.

“They will be reassured by the Prime Minister’s firm pledge to back business. However, warm words are not enough, and businesses expect concrete measures in the Budget and beyond to fix the fundamentals here at home, and underpin future competitiveness, productivity, and prosperity.”

On Brexit, he said: “Firms will judge the Government on the clarity they provide on the real-world questions around Brexit, and whether the UK will avoid a messy and disorderly exit from the EU.

“Firms will be relieved that the Prime Minister views no deal as a bad outcome – but clarity and precision is required urgently if businesses and our communities are to thrive in the months and years to come.”

Commenting on Mrs May’s claim that austerity is over, Scottish Labour leader Richard Leonard said: “No one will believe Theresa May’s claims on austerity when we see overstretched public services, children in poverty and rough sleeping on the rise.

“Austerity is a political choice from the Tories to shrink the role of the welfare state in the United Kingdom. It is a failed attempt to balance the books on the back of the poor, and a choice driven purely by Tory ideology.

“The only way to end austerity is with a Labour government that works for the many, not the few, making the richest pay their fair share to deliver investment in a fairer country.

“That is how we rebuild Britain and rebuild Scotland – not with hollow promises from a discredited Prime Minister.”