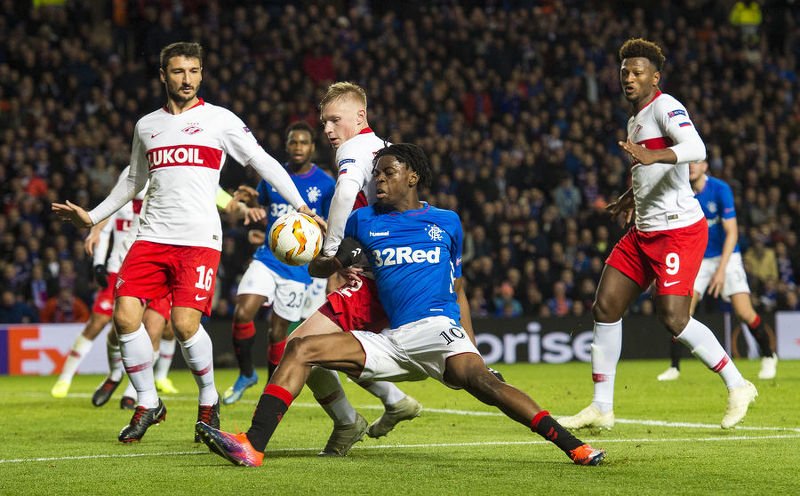 There’s no way through for Rangers’ Ovie Ejaria on a frustrating night for the Light Blues against Spartak Moscow at Ibrox (pic: SNS Group)

Steven Gerrard outlasting Brendan Rodgers in Europe remains a strong possibility after the latest round of group matches saw Rangers extend their unbeaten run to a record 11 games while Celtic flopped once again on their travels.

Although the Light Blues failed to make their dominance tell against Spartak Moscow, the share of the spoils could yet prove an invaluable point in the battle to progress from Group B.

Celtic, on the other hand, failed to produce anything like their best in losing to RB Leipzig and now face a must-win game against the Germans in Glasgow next month.

For the first time in 11 games at home this season, the Gers failed to score but although they were disappointed at the stalemate, they still sit joint-top of their group alongside Villareal, who thrashed Rapid Vienna 4-0 in Spain.

The home side created a number of chances to break the deadlock but Alfredo Morelos, Daniel Candeias and Eros Grezda all should have done better with the opportunities.

The draw – and a sixth clean sheet – continued a remarkable run in Europe for the Ibrox side who have yet to taste defeat in the competition under Gerrard.

The 11-game unbeaten run marks the longest such streak in the club’s history and Gerrard said: “We were very good first half, we had control, then they played better after the break.

“We came back into it, both teams defended very well, so we felt one goal would be crucial.

“We couldn’t get the goal but it’s not two points dropped for me. We did everything but score.

“We’ve got three games to go, we want to have a chance of going through in the final game. We’ve definitely come a long way. We can certainly improve, but we’re making huge strides from where we were.” 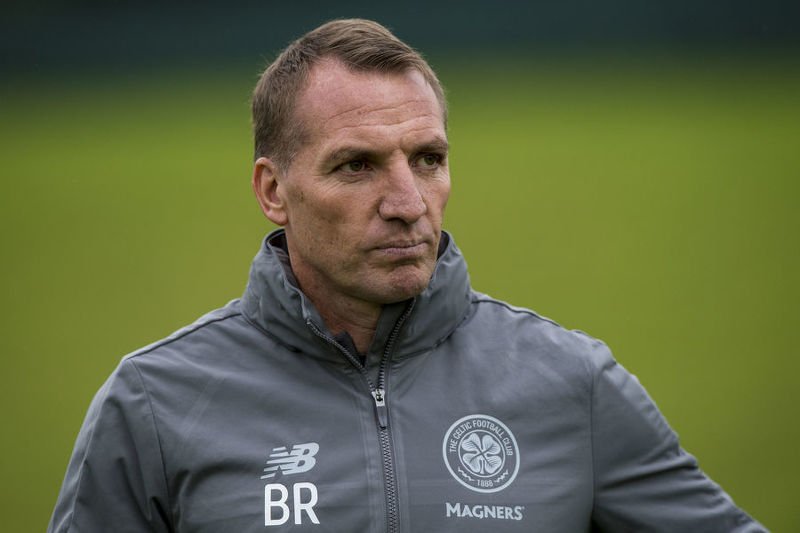 Celtic’s loss to Leipzig means they have to beat the Germans in Glasgow in next month (pic: SNS Group)

Celtic have it all to do if they are to make the knockout stages after another insipid European performance on the road.

The Glasgow side were minus a host of key players in Leipzig but still should have produced a better display.

Apart from chances at either end of the game, they rarely looked like scoring in the RB Arena and can count themselves fortunate to have escaped with just a two-goal defeat.

It’s a movie which boss Brendan Rodgers has been in before this season in Europe, powderpuff in attack and slack in defence.

The home side didn’t have to be at their best and didn’t have to overstretch themselves to take the three points, defensive lapses from Celtic presenting Cunha and Bruma with goals in the space of a few first-half minutes.

“We started the game well and imposed our style,” said Rodgers, who must hope his players can raise their game for Sunday’s Scottish League Cup semi-final against Hearts at Murrayfield.

“We had a great chance with Odsonne Edouard but then we had periods where we made mistakes, which knocked us for five or 10 minutes.

“We regrouped in the second half and had chances when we could have got it to 2-1 but we didn’t get the goal at key moments in the game and didn’t defend well enough.

“It’s frustrating, especially when you make a good start in the game. It’s not any great piece of play that’s undoing us.

“It’s mistakes that cost you. It’s unfortunate for us because it hurts you at this level. We will go away and analyse what we can do better defending those moments and then try to correct it.”

Celtic sit in third place in the table on three points, three adrift of Leipzig and six behind leaders Salazburg, who beat Rosenborg 3-0 at home.

The Hoops must look to beat the Germans when they visit Glasgow on November 8, otherwise it will be the end of another disappointing European campaign.

“We have seen enough to know that we can win the game at home when some of our players come back,” said Rodgers, who was without Leigh Griffiths, Tom Rogic, James Forrest, Scott Brown.

“From tonight’s performance, I believe it’s something that’s well within our capabilities.

“It will be a great night with our supporters. Their support was amazing throughout tonight.

“Having 60,000 at home will be a great opportunity. But if we are going to have any aspiration of getting through the group, it’s a game first and foremost we have to win. That will be our objective.

“We’ve obviously lost two matches now against two very good sides away from home we’ve got three points on the board but we always knew our home games would be vital for us and try to pick up something away.

“There are three other sides, two who really are Champions League level, but we are still in with a great chance.

“We have to look to the next game at home and look to win that – if we don’t it becomes really difficult. It gives us a great chance but we know we have some work to do.”

Jozo Simunovic failed to finish the game after being carried off with an ankle injury, adding to Rodgers’ injury concerns ahead of Sunday.