by Brian Monteith from the Tory conference | October 5, 2018

The British party conference season is over and despite the self-induced euphoria of many Conservatives following the Prime Minister’s closing speech there are thunderous clouds gathering. Make no mistake, they are guaranteed to rain on their parade.

Party conferences are a temporary aberration designed to keep supporters motivated for the long haul ahead and in a state of readiness for anything bigger. After springing the secret Chequers Plan on her Cabinet and party devotees the risk for Theresa May was to survive the four days without political embarrassment or a tangible threat to her leadership.

As I wrote last week there was never any likelihood of anything so rude as a leadership challenge emerging in Birmingham, but much else could go wrong, and it did.

Her Chequers Plan was rubbished endlessly by members, the slogan “Chuck Chequers” owned the conference and the 40-plus Brexit fringe meetings were packed while the conference hall was usually half-empty. When Mrs May first mentioned Chequers at a closed meeting on Sunday she was booed; something she could not allow to happen in public.

Thus, in her speech on Wednesday she avoided using the “Chequers” word, it is now a policy that dare not mention its name. This demonstrated in plain sight the loss of her authority within her party, but could her speech save her? Possibly.

After last year’s debacle the bar was set lower than any limbo dancer might attempt, but she overcame it with an impressive performance. The astute use of self-deprecating humour about her coughing, and self-ridicule of her the robotic dancing provided a base to start from. While the content was long on ideological inspiration it was short of conservative policies, but the loyalists were willing her on. She could have announced a 5p tax for the NHS and she would still have been wildly applauded.

The ably-delivered speech has won the PM time but masked a moribund party living in fear of defeat. I have never seen such an uninspiring Tory conference so devoid of ideas. If it had not been for the Brexit rebellions in the bars, think-tents, halls and canal boats the media would have noticed there was little else to report.

So where does this leave Mrs May and her Tory party?

The problem for her is this: she made promises to her MPs, her party and the voters about the type of Brexit she would agree to. She went back on her word and can only now be saved by the EU, the Labour Party – or her Conservative critics failing to follow-through with a leadership challenge. All options are under the direction of her enemies. 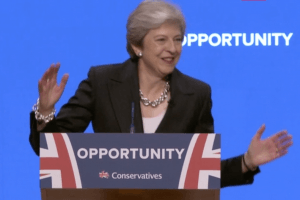 The Prime Minister now faces a crucial Cabinet meeting next Tuesday and a crucialEU summit on 17 October. If anything is to change it needs to be at one or both of these meetings. There is nobody supporting the Chequers Plan other than Mrs May herself and a few cabinet ministers. The EU thinks it can win more concessions, while Cabinet moderates such as Jeremy Hunt have signalled they are willing to shift to a Canada-style deal. I am assured concessions beyond Chequers will only bring more Cabinet resignations, isolating the PM more.

If a deal – probably by then called Chequers-Minus – can indeed be put before Parliament it faces being defeated, with some 40 Conservatives said to be ready to vote it down. If it crosses DUP red lines they will vote against it too, preferring No Deal; for they will put a hard border with the Republic before a sea border between Northern Ireland and the UK.

The PM could make her Chequers-Minus Deal a vote of confidence in the government, which requires a five-day notice period. In that scenario backbenchers are threatening to submit enough letters to the Chief Whip to trigger a leadership challenge that will force such a vote of MPs sooner.

If they win the search for a new leader will begin, with a temporary leader in place and the Chequers-Minus deal will be withdrawn. Negotiations will have to reopen or the UK will move to No Deal. If May wins, the Government may still not get its deal approved and No Deal beckons again.

How Jeremy Corbyn will respond remains to be seen but his focus has always been towards forcing a general election as he thinks he can win it. The problem remains however that to call an election requires a two-thirds vote of MPs and there is unlikely to be such a majority for it, especially if the Conservatives feel they will lose.

If there is going to be no general election until 2022 there must be a genuine possibility that Labour will switch from Mr Corbyn (by then 73) to the marginally younger John McDonnell or Emily Thornberry – but either prospect offers an economic alternative with huge capital flight and a run on the pound that would make Brexit look like afternoon tea on the lawn.

What is certain is that if the UK leaves the EU with a Brexit requiring further change at a later date the Tory party will remain as divided over Europe for the next 30 years as it has over the last 30 – and divided parties lose elections.