Dons see off Rangers to set up Celtic final 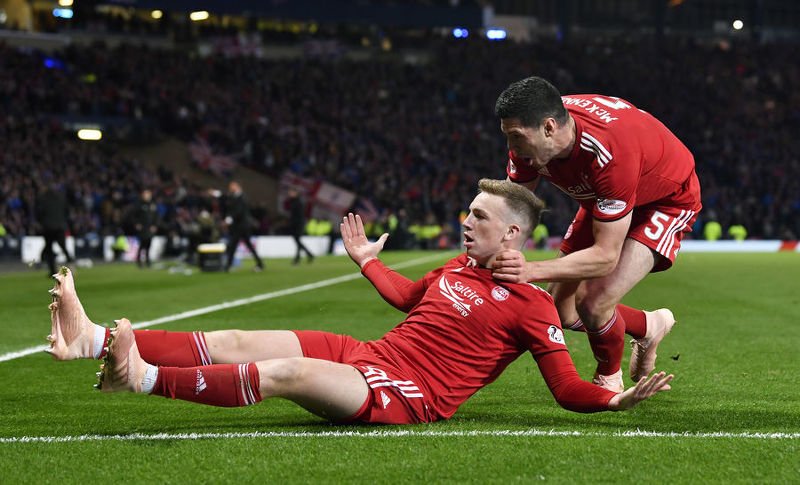 Despite being under pressure for large parts of the match, the Dons defence held firm and they scored the only goal of the game 11 minutes from time to set up a repeat of the 2016 showpiece against the Hoops, who had cruised past Hearts at Murrayfield earlier in the day.

The hero for the Pittodrie side was Lewis Ferguson, son of former Ibrox midfielder Derek.

Aberdeen had to pay Hamilton Accies in the region of £250,000 compensation to bring the youngster north in the summer but the money will seem well spent after his late header from a corner steered Derek McInnes’ side into the December 2 showpiece at the National Stadium.

Rangers will be disappointed they didn’t make their possession count but without top scorer Alfredo Morelos in their line-up, they didn’t do enough in the final third.

Joe Lewis was rarely troubled in the Dons goal and when he was called into action, the towering keeper was his usual safe pair of hands.

“We defended well but Joe Lewis didn’t have too much to do,” said the Dons boss. “I just wanted us to try and play the game more in and around their box, we didn’t utilise the pace of our front players enough.

“I always thought one goal would be enough: Rangers without two recognised two centre-forwards and we’ve been struggling for goals.

“I thought they ran out of ideas, they huffed and puffed, threw crosses in from too deep, shot from too far out. Once we got the goal, we saw the game out well and got better as it went on.

“We’ve played St Mirren, Hibs at Easter Road, Rangers at Hampden – not conceded a goal. We’re still struggling to find our best form but the players are working extremely hard.”

The result was a blow for Gerrard who had been looking to take his team to his first cup final at the first time of asking.

The former Liverpool captain was left to rue a ‘smash-and-grab’ from Aberdeen, though made it clear he will look to replace any of his squad who fail to rise to the big occasion.

He said: “We did everything but create clear-cut chances. We huffed and puffed and created half-chances but that’s not enough in semi-finals. People need to have the courage and responsibility to step up and take them.

“We got into some good positions and either made the wrong decision or showed a serious lack of quality. If these players don’t step up, it’s very simple at a big club: the manager goes and finds better quality.

“It’s a disappointed dressing room but I’m out here to take responsibility for that – my players, my tactics, my game plan. If there are any fingers to be pointed let them point at me.

“We played well but we didn’t have any quality in the last bit of our play.

“We congratulate Aberdeen, they’ve smashed-and-grabbed and punished us from a set-piece and they go through.

“I’m here to take the responsibility I need to take. I pick the XI, I brought in 14 players in the summer. Everything that’s gone on today is on me and I’ll take it.” 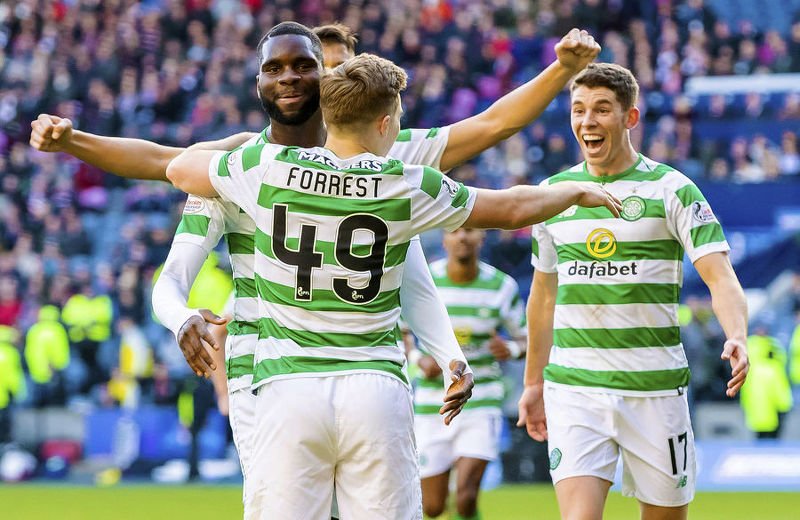 Celtic’s domestic dominance under Brendan Rodgers began with victory over Aberdeen in the 2016 final and there was little doubt the Parkhead outfit would be returning to Hampden after taking the lead against Hearts early in the second half at the home of Scottish Rugby.

Scott Sinclair set the Bhoys on their way with a 53rd-minute penalty after Ryan Christie tumbled in the box under pressure from Bozanic.

The league champions may have been suffering in Europe this season but have set their sights on a third successive Treble on the home front.

The Jambos had gone into the semi-final showdown confident of inflicting their second victory over Brendan Rodgers’ side this term but were left licking their wounds after a disappointing result in the Capital in front of the second largest crowd to watch a football match in Edinburgh.

James Forrest capitalised on a howler from Zdenek Zlamal to net his side’s second after 66 minutes and Christie put the finishing touches to an impressive performance with a superb left-foot finish with 72 minutes on the clock.

Craig Levein’s containment policy worked well in the opening 45 minutes, despite the early loss of captain Steven Naismith through injury.

However, the game changed early in the second half with the penalty, with both managers admitting it was a ‘soft’ award by Willie Collum.

It was a big statement from Celtic, the performance just what Rodgers was looking for after the Europa League loss in Leipzig in midweek.

It’s the Northern Irishman’s fifth successful cup final since taking charge of Celtic and he said: “I thought in the second half we were brilliant, there was great energy and quality from the player so I’m very pleased.

“The penalty was maybe a bit soft if you’re Hearts but Willie (Collum) couldn’t have been in a better position. It certainly helped us in the game as from that moment on we were magnificent.”

Asked about the penalty award, opposite number Craig Levein said: “I think it’s very soft, I really do. It probably made the difference in the match. Our boys looked disappointed and the next goal is silly. First and foremost I have to look at our performance and it’s a disappointing day, I can’t hide from that.”