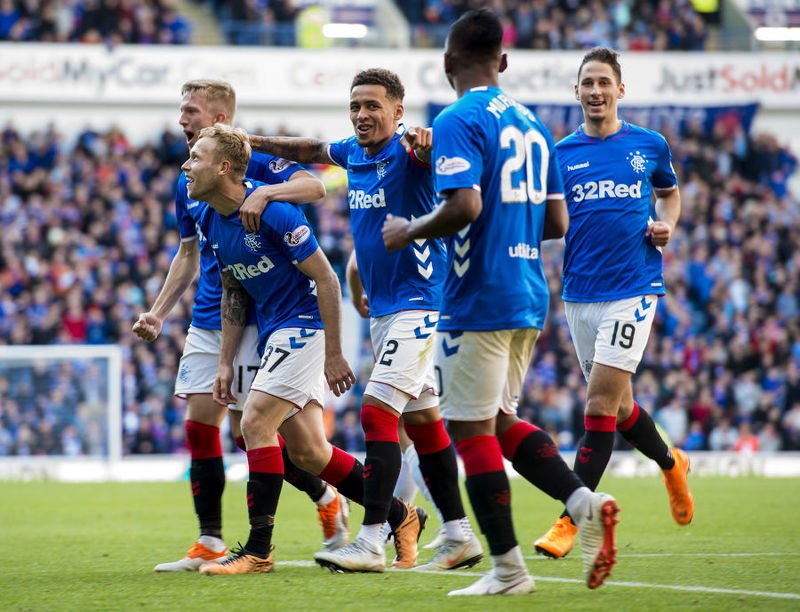 Rangers are among nine top-flight clubs to have earned £370,000 thanks to Celtic making it into the group stages of the Champions League last season (pic: SNS Group)

The financial gulf between Celtic and their domestic rivals has been highlighted by the fact the Glasgow club made nearly £29million by reaching the Champions League group stages last season.

Figures released by UEFA show the Parkhead side raked in 36.5m Euros (£28.7m) by successfully progressing through the qualifying rounds.

Although they subsequently failed to make it into the knockout phase of the tournament, of those clubs eliminated from the group stages Celtic were among the top earners, bringing in more than the likes of Borussia Dortmund, Atletico Madrid and Olympiakos. Only Monaco, Napoli and RB Leipzig made more than the Scottish champions.

The money makes up over a third of the club’s annual revenue, underlining the importance of participation in Europe’s elite competition for Peter Lawwell and his board of directors.

The success of the Hoops, who take on RB Leipzig in the Europa League this evening, on the European stage was also good news for their top-flight competitors, including arch rivals Rangers, who are also in Europa League action tonight at home to Spartak Moscow.

Nine Premiership clubs all received over £370,000 in solidarity payments thanks to Celtic making it into the group phase.

Neil Doncaster, chief executive of the SPFL, said: “This is welcome news for the clubs involved in last year’s Ladbrokes Premiership.

“As well as clear financial benefits for top-flight clubs, Scottish clubs performing well in European competition increases the league’s profile, which is good for everyone.”

Premiership clubs have now received payments of more than £4m for two consecutive years, the windfall more than double the £1.8m received in 2016, and ten times more than the £400,000 awarded in 2015.