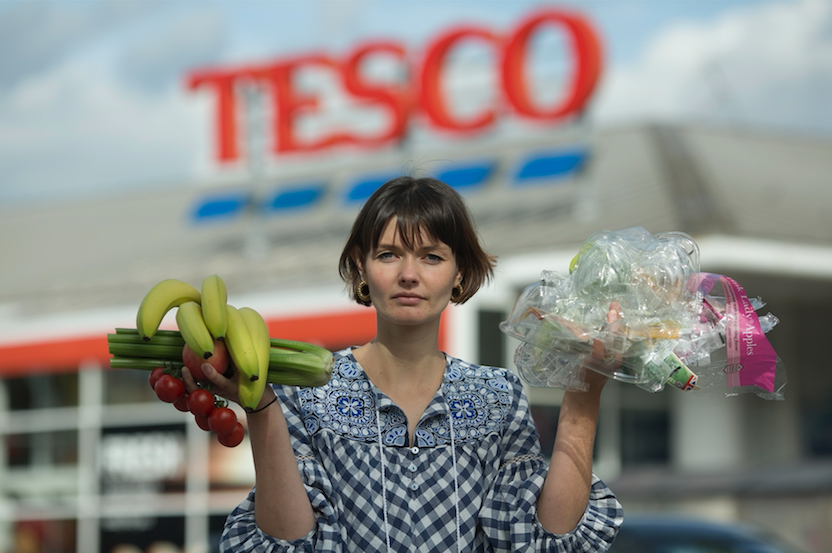 Shoppers and environmentalists have stepped up the war on plastic packaging by leaving single use packaging at supermarket tills across the UK.

Campaigners led by Greenpeace have left the disposable packaging at checkouts with notes to store managers calling for action to reduce excessive throwaway wrapping.

Greenpeace points out that UK supermarkets generate more than 800,000 tonnes of plastic packaging waste every year, much of it ending up in the sea.

This weekend shoppers were encouraged to remove unnecessary plastic packaging from items they had purchased and leave it at the checkout, handing responsibility for its disposal back to the company selling it.

Anthony Lewis, who took part in protests yesterday at Aldi and Marks and Spencer, said: “To be honest, I think it’s pretty strange that Marks and Spencer’s is still selling avocados wrapped in plastic given the huge public concern over plastic pollution.

“Everyone knows that supermarket packaging borders on ridiculous – but now we know how much damage it’s doing to the environment. Supermarkets need to set solid, timed commitments to reduce how much plastic they put on their shelves. Just like plastic pollution, we’re not going away until they take action.”

Public support for action on plastic pollution is growing rapidly with 130,000 members of the public responding to the Treasury call for evidence on how taxes and charges could be used to address single-use plastic pollution. It has set a new record for a Treasury consultation. 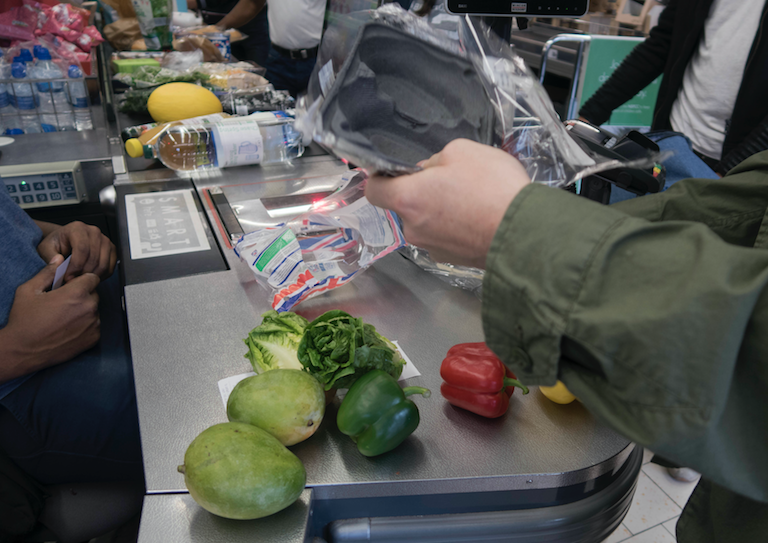 Campaigners removed packaging from products and left it at the tills (pic: John Cobb, Greenpeace)

Greenpeace’s 2016 microbeads petition calling on the government for a ban on tiny microplastics was Greenpeace UK’s most successful environmental petition, now surpassed by a new petition asking supermarkets to reduce the volume of throwaway plastic packaging they produce, signed by more than 650,000 people across the UK.

Environmental organisations have also challenged major supermarkets to act on plastic, launching a new survey to rank their efforts.

Greenpeace UK and the Environmental Investigation Agency (EIA) are conducting a survey of major UK grocery retailers, their use of single-use plastic packaging and their targets to reduce it. The results will provide a benchmark for current commitments and actions on curbing plastic pollution.

“The government has to act, but these shops also have a huge and vital role to play by listening to their customers’ concerns and cutting the overall amount of throwaway plastic they create.

“Supermarkets urgently need to remove unnecessary and non-recyclable plastics from the shelves by 2019 and embrace truly sustainable alternatives including reusable packaging.

“We’ve seen some token gestures, even some encouraging steps, but what we need is a complete change of approach, and we need it to start now.”

Greenpeace is calling on UK retailers to:

– Introduce transparency by publishing yearly audits of single-use plastic us

Iceland has pledged to remove all plastic packaging from its own ranges by 2023.

Many SMEs are implementing their own initiatives to reduce the amount of plastic waste they generate.

In a survey of 900 businesses more than 4 four in every five (83%) businesses – regardless of size or sector – answered ‘yes’ to the question ‘do you feel that plastic waste is a problem?

In the Transport and Haulage industry, the figure rises to 92%.

The waste issue has prompted 63% of those surveyed to do something proactive by putting in place initiatives to reduce their reliance on plastic.

However, the research also found that the smaller the firm, the less likely they are to be doing something about it, relying instead on individuals to take action themselves.

Neil Davies, CEO of Close Brothers Asset Finance which conducted the survey, said: “With the environmental damage caused by plastic waste becoming increasingly clear, companies are taking it upon themselves to do something about it.

“It looks as if momentum is building, with over half of those polled having actively investigated alternatives to plastic.”

Of those surveyed, 58% feel they aren’t being incentivised enough to reduce the amount of plastic waste they use and produce. The lack of encouragement is felt most acutely in companies where there are the fewest employees (between 1 -10), where 69% aren’t feeling suitably enticed.

Mr Davies said: “Incentives are a proven way to mobilise both businesses and individuals to take action. A good example is solar PV where various schemes have seen a significant uptake in generation while a substantial reduction in government subsidy has not ended interest in solar investment.”

More than half of firms (54%) polled have actively investigated alternatives to plastic, with the food and drink sector particularly proactive (67%), followed by retail (59%) and manufacturing (59%).

Mr Davies said: “There is an obvious demand for alternatives from both consumers and businesses. Industry is clearly part of the solution and not the problem, and with a history of innovation I strongly believe more options will become available in the foreseeable future, ranging from utilising existing waste to create energy to the manufacture of less harmful packaging products.”