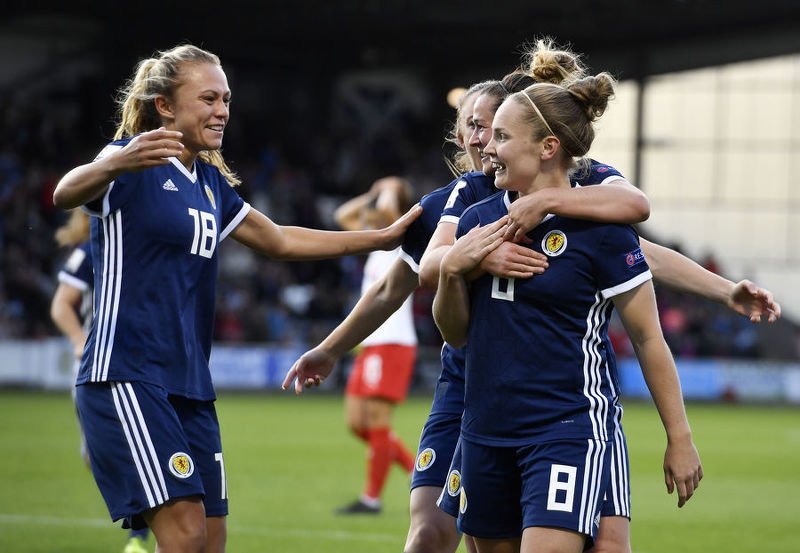 Scotland’s Women will compete in the World Cup in France next year for the first time after defeating Albania (pic: SNS Group)

Scotland’s Women played their way into the record books after qualifying for the 2019 World Cup finals for the first time after a day of drama in Albania.

The Scots secured the victory they needed thanks to goals from Kim Little and Jane Ross and with Switzerland failing to beat Poland, Shelley Kerr’s team qualified automatically for next year’s tournament in France.

Scotland went into the final Group 2 game in Shkoder level on points with the Swiss but behind on goal difference.

Little had put the visitors ahead early in the first half, only for Doci to send the teams in at the interval on level terms with a goal on the stroke of half-time.

Jane Ross popped up with 68 minutes on the clock to get on the end of a free-kick and send a header into the back of the net and set up a nerve-shredding finale.

The final whistle sparked scenes of wild celebrations among the Scots, with the Swiss having minutes earlier drawn 0-0 in Poland.

“Nothing compares to this,” said Kerr,  who took over from Anna Signeul in April 2017

“We had seven or eight good chances, we’ve hit the post and we should have made it more comfortable, but we’ll learn from it. I’m super proud of them.

“The players have to take the credit for this because they put in all the hard work.

“I’m so proud for everyone involved in the girls’ and women’s game in Scotland.

“We play exciting, attractive football. I am just delighted we are going to France next year.”

First Minister Nicola Sturgeon was among the first to send her congratulations, taking to Twitter to say: “Massive congratulations to our women’s team as they show us how it’s done. I’m a very proud team patron!”

BBC Alba, meanwhile, has announced it will show all of Scotland’s 2019 Women’s World Cup matches live.