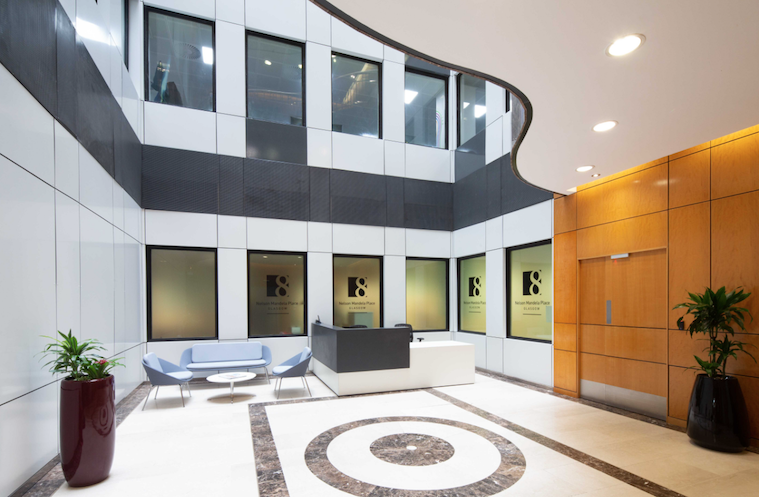 In a deal brokered by Knight Frank and Montagu Evans, the 10-year lease sees CTM move into the 4,605 sq. ft. first floor suite from its previous location at the Hatrack on St Vincent Street.

The lease also marks full occupancy for Eight Nelson Mandela Place, which was bought by Topland in a deal worth £11m in July 2017. Since then, the firm has invested more than £200,000 in renewing and enhancing the cladding with an impressive internal atrium.

Knight Frank, which represented Topland in its initial purchase of the building formally known as The Athenaeum, along with joint marketing agents, Montagu Evans, assisted in regearing and renewing a number of leases for existing tenants.

Marketing technology company Socialicity is taking 5,865 sq ft at 180 St Vincent Street, Glasgow where it has agreed a rent of £23 per sq ft on a six-year lease.

This transaction follows the lettings to HRC Recruitment, Turcan Connell and Alexander Sloan in the last six months.  The building was fully refurbished by owner Northwood Regional UK.

Socialicity provids services for financial businesses and is headquartered in Watford, Hertfordshire.

Ryden & JLL represented Northwood whilst Socialicity Limited acted for itself.

Tayforth House in Dundee has been sold by Shepherd Chartered Surveyors to a private investor for £1.4 million. The 19,670 sq ft pavilion style two storey building is let in its entirety to Aberdeen Standard Investments until 2024, with the accommodation sub-let to BNP Paribas. The current rent is £195,000 per annum.

In Perth, Santé Wine Bar and Restaurant, has been sold to a private investor for £405,000. Sitting directly opposite Perth City Hall in the area known as Perth’s Cafe Quarter. The 2,224 sq ft property is let to Codex Restaurants for 20 years at an annual rent of £37,750, representing a net yield of 9%.