Unless you suffered a power cut, all your iThingies packed in and you didnae buy a newspaper at the weekend you will be only too aware that Saturday marked the tenth anniversary of the day the world banking system seized up and we all held our breath.

I’m referring of course to the world’s biggest ever corporate bankruptcy (funny I’d never noticed the word bank in there before, but how appropriate). Lehman Brothers, a major bank over in the US. I read somewhere that this sudden collapse was being “celebrated” ten years on. Not a verb I’d have used.

I remember it all too well. Though “well” isn’t a word I’d have used at the time either. Turning the clock back to 2006 I recall how the “investment flavour of the time” was anything to do with Property or Banks. Advisers looking for an easy sale were piling clients’ money into property funds or Index trackers which at the time were dominated by banks.

From memory, banks made up over 20% of the FTSE100 Index “value”, and currently much maligned Neil Woodford, then of Invesco Perpetual, was being publicly castigated for his refusal to buy into the “buy the banks” hype at the time. His response was that he didn’t understand their balance sheets and how others were valuing them so highly.

Crazy when you think of how they were being valued. So you put deposits into a bank, which you can remove whenever you fancy, they lend it out long term to borrowers who may not be able to afford to repay, or worse, go bust. And somehow all that’s turned into bank “assets”? As some wag said after the shirts hit the van (or words similar) ”the numbers didn’t add up. On the left hand side of the accounts there was nothing right, and on the right hand side there was nothing left.” 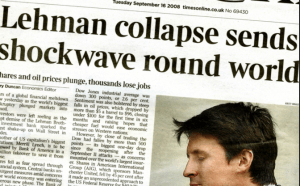 I was in Nova Scotia on holiday the day the world held its breath when Lehman failed. Didn’t sleep well for a few weeks. Only days earlier I’d attended a meeting in New York held by fund managers and some of the world’s leading economic analysts. Things were going well with a consensus that following the UK Government’s actions to safeguard Northern Rock depositors and the US Government’s bailing out of leading financial group Bear Stearns, things were looking rosy again.

Until Ned Davis Research’s Joe Kalish entered the room coincidentally as black storm clouds rolled in. In no uncertain terms Joe laid out the reasons why an “imminent financial Armageddon” was on the cards. Four days later he was proved right. Nowadays all sorts of “experts”, from Vince Cable to Robert Wiedemer, claim to have predicted “the great financial crisis of 2008”. Truth is I know only one who changed from being positive when it mattered most  – Joe Kalish.

As to “economic experts” like Wiedemer, they constantly predict doom year after year in the hope they’ll get it right one day. Mr Wiedemer has publicly predicted the following every year since 2012: “the data is clear, 50% unemployment, 90% stock market drop, and 100% inflation starting next year”. He repeated his annual “forecast” this year. I hear his blood group is B Negative and he still sleeps with his hall light on.

I read recently that over half of our accumulated savings in ISAs are in cash and that most contributions to ISAs in the last tax year went into cash ISAs despite the fact that interest rates have been at their lowest rate since the 17th century for over nine years now. Ignoring inflation, which isn’t wise for long term investors, the rate of interest accrued in cash ISAs this last 9 years will take up to 720 years to double their money! Ouch.

So why are so many investors turning their backs on equity investment? Fear? Or lack of knowledge? Or a combination of both?

Reading Bobby Duffy’s “The Perils of Perception” is eye-opening. Research in some 30 countries has discovered massive differences between people’s perceptions and the reality across a wide spectrum, including money, health, politics, and even sex. (don’t ask).

Duffy for instance quotes Max Roser of Oxford University who said that news programmes could have legitimately run the headline “Number of people in extreme poverty fell by 137,000 yesterday” every day for the last 25 years. But the predictable and good news aren’t newsworthy because that’s how our brains work. We crave bad news, it seems, but it causes untold damage to our wealth and health.

Triggered by the 10th anniversary of that frightening financial collapse it’s attracted a wave of despondency and gloom yet again. There’s now an explosion of pessimistic views agreeing that the next crisis is around the corner and a lack of ammunition left for Governments to rescue us from another Armageddon. So here’s some perspective for you….

Since 1926 (including the Great Depression and crash beginning in 1929), there’s been fifteen recessions, eight bear markets, and nine bull markets, including the one that started in March 2009, much to the amazement of pessimists. The average bull market lasted over nine years and saw the main US stock market rise on average by 476%. The average bear market lasted under one and a half years, with an average fall of 41%.

Last week a survey in the US established that the perception of 50% of respondents was that the US stock market had gone sideways at best over the last 10 years,  while another 20% believed it had gone down. The reality is it had almost trebled in value as measured by the S&P500. The Nasdaq did even better.

As to Joe Kalish, what are his thoughts now? He thinks we may be due for a pullback, so he’s keeping an umbrella handy. No big black clouds yet, though. As for me, having been around in this business for 45 years, I’d have a good look at your outstanding investment successes this last 5/6 years and maybe think of banking some profits and looking for bargains elsewhere. They call it “Reversion to Mean” I call it “Common Sense”.

Getting the measure of a market index