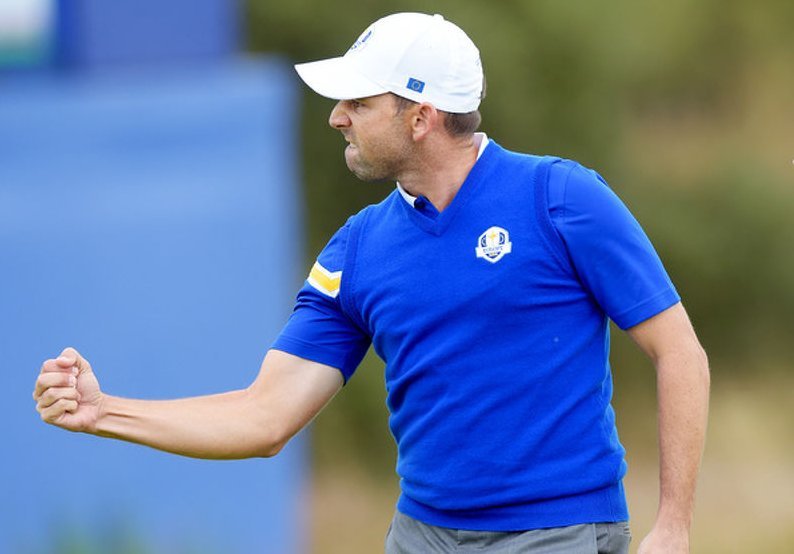 On a thrilling final day in Paris, the Italian completed a perfect haul of five points with a 4 and 2 victory over Phil Mickelson after the United States had threatened a stunning comeback.

The US won three of the top five singles matches to close the gap on Europe to just one point but rookies Thorbjørn Olesen and Jon Rahm claimed the notable scalps of Jordan Spieth and Tiger Woods as the tide began to turn blue again.

It was then left to the experienced quartet of Molinari, Ian Poulter, Sergio Garcia and Henrik Stenson to complete the win with victory in their respective matches, before Alex Noren beat Bryson DeChambeau on the last to give the score a healthy gloss.

On a remarkable afternoon, Molinari becomes the first European player to compile a perfect 5-0 record in the contest, with American Larry Nelson the only other to do so in 1979, while Garcia’s 2 and 1 victory over Rickie Fowler made him Europe’s all-time leading Ryder Cup points scorer.

“So much more than Majors, more than anything,” Molinari said when asked what the winning moment meant.

“It’s hard not to get emotional when you think about the other players, the vice captains, Thomas, the wives. It’s been an incredible week. Obviously they had probably the strongest team ever and were just so good.

“I just try to do things, be professional and obviously I had an amazing partner in Tommy [Fleetwood]. Never felt like I had a rookie playing alongside me.

“It’s been the best I’ve been a part of. I said it at the beginning of the week, we gelled as well as ever and just incredible, every single one of the players.”

Europe’s 10-6 lead meant they came into day three needing just four-and-a-half points from the 12 singles clashes for a ninth Ryder Cup win in the last 12 encounters.

But it was Jim Furyk’s men who struck first, putting the first point on the board when rookie Justin Thomas beat Rory McIlroy by one hole in the top match.

McIlroy led for large spells of the match but things fell apart for him at the last as he sent his third shot into the water after getting into bunker trouble.

After Englishman Paul Casey took half a point from his match against three-time Major champion Brooks Koepka to put Europe 10.5-7.5 up, Webb Simpson completed a 3 and 2 win against Justin Rose to reduce America’s deficit to two points.

Tony Finau then ended his fellow-rookie Fleetwood’s 100 per cent record with a thumping 6 and 4 win in match five to make it 10.5-9.5.

However, momentum shifted back to Thomas Bjørn’s side as Olesen completed a resounding 5 and 4 victory over Spieth to record his first Ryder Cup point, and Rahm followed suit when a birdie on the 17th gave him a 2 and 1 win over Woods.

“I really wanted to win today,” said Olesen. “Obviously not playing yesterday, the boys played great and just wanted to get out there and get a point for Europe.

“It’s been unbelievable. I played great on the front nine. Holed some really, really good putts and the crowd were mental. It’s been so much fun.”

Poulter birdied the last to secure a 2 up win over World Number One Dustin Johnson, and with Stenson, Molinari and Garcia all dormie in their matches, victory was assured.

Mickelson then found water off the 16th tee, and with Open Champion Molinari in close the pair shook hands.

Stenson duly completed a 5 and 4 triumph over Bubba Watson, Garcia made history with victory over Fowler and, although Patrick Reed secured a 3 and 2 win over Tyrrell Hatton, Noren holed a 30-foot putt on the last to the delight of his waiting team-mates.

Garcia’s 2 and 1 victory over Fowler saw him become Europe’s all-time leading points scorer in the Ryder Cup with his total now sitting on 25.5 point.

Playing in his ninth Ryder Cup this week, wildcard selection Garcia won three points at Le Golf National – one on each day – to write his name in the history books.

He said: “It means a lot but at the end of the day, and I’ve always said it, it’s about the team and I’m happy that I was able to help.

“I’m happy that I was able to help with some of the points.

“It’s a bonus. It’s something that I never thought I would have the possibility of doing and now that it’s happened, you know, I’m just so happy.

“What a week. It’s been a rough year but you know, we fought hard. Obviously I’m so thankful to Thomas for picking me and believing in me.

“I’m so happy to get the cup back here in Paris and in Europe and for everyone to enjoy it as much as they did.”